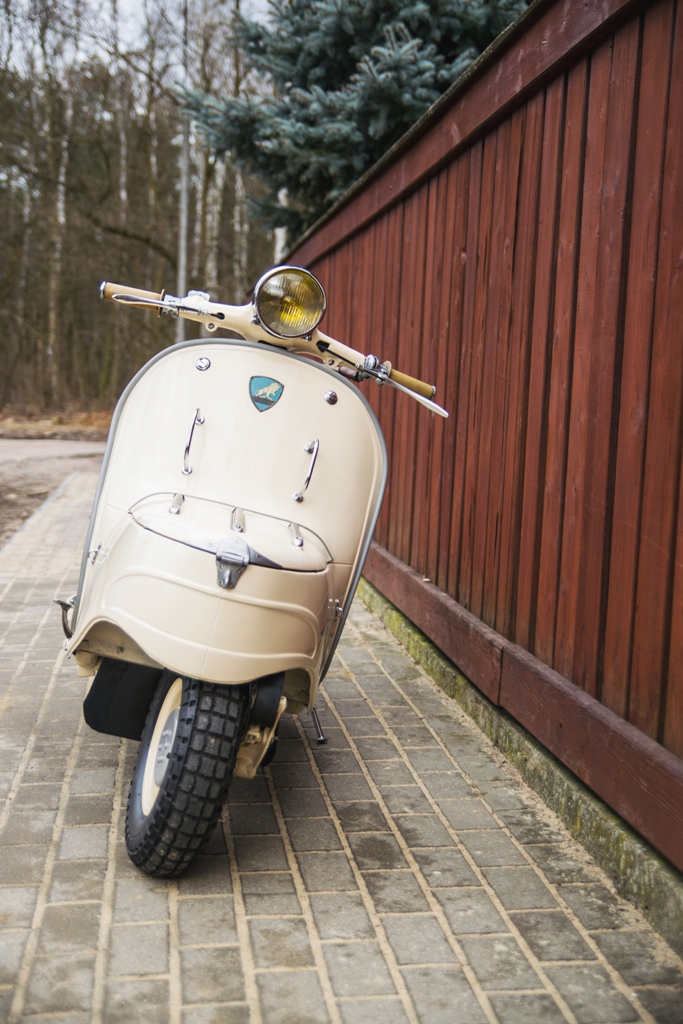 Motoring industry in post-war Europe had numerous difficulties to overcome. Mobility was a crucial aspect in lives of Europeans. Cheap utility vehicles were slowly gaining popularity in Western Europe. Apart from simple cars, some manufacturers also tried their hands at producing scooters. Thanks to their uncomplicated design and low fuel consumption they quickly won the hearts of the Europeans. In the 50s Peugeot, one of the most recognizable French car manufacturers, decided to use the experience they gained designing cars and motorcycles. In 1953 they launched an entirely new vehicle – a scooter called S55. Power unit was borrowed from a small motorcycle of the same brand called P55. The new vehicle definitely looked refreshingly different compared to its competitors. Its distinctive front cover with an integrated storage space became a trademark feature of Peugeot-branded scooters for years afterwards. Year 1954 marked a model update and introduction of some new variants: S57, S57AL and S157. Numerous innovations included a new gear change system, in which the pedal was replaced by a selector handle bar-mounted selector. In 1957 a final iteration of the S157 was released, with a distinct front fender moving independently from the body. Peugeot took an entirely different path of development to that of Vespa or domestic WFM works with the “Osa”. Thanks to that, we can now admire the quirky design from the late 50s and early 60s.

This scooter offered by Ardor Auctions is a perfect evidence that Poland’s post-war motoring was not limited solely to domestic products. The Peugeot was registered in Poland in 1967. Since then it was used for 9 more years and it was deregistered afterwards. Its current owner bought it in 2004 and decided to restore it completely. The vehicle was dismantled and meticulously rebuilt by a company specializing with vintage scooters. All mechanical parts were refreshed, some of them were also clear-coated. Beige paint perfectly matches the original colour combination and refurbished chrome elements. With the restoration finished, which took nearly two years, the scooter became a vital part of a unique motorcycle collection.  As of today, the Peugeot does need a bit of a maintenance to bring it to an operable condition as well as clutch linkage replacement. Taking into the account that the vehicle has a Polish history and is incredibly rare in Europe, this is a unique opportunity to purchase a fantastic scooter.