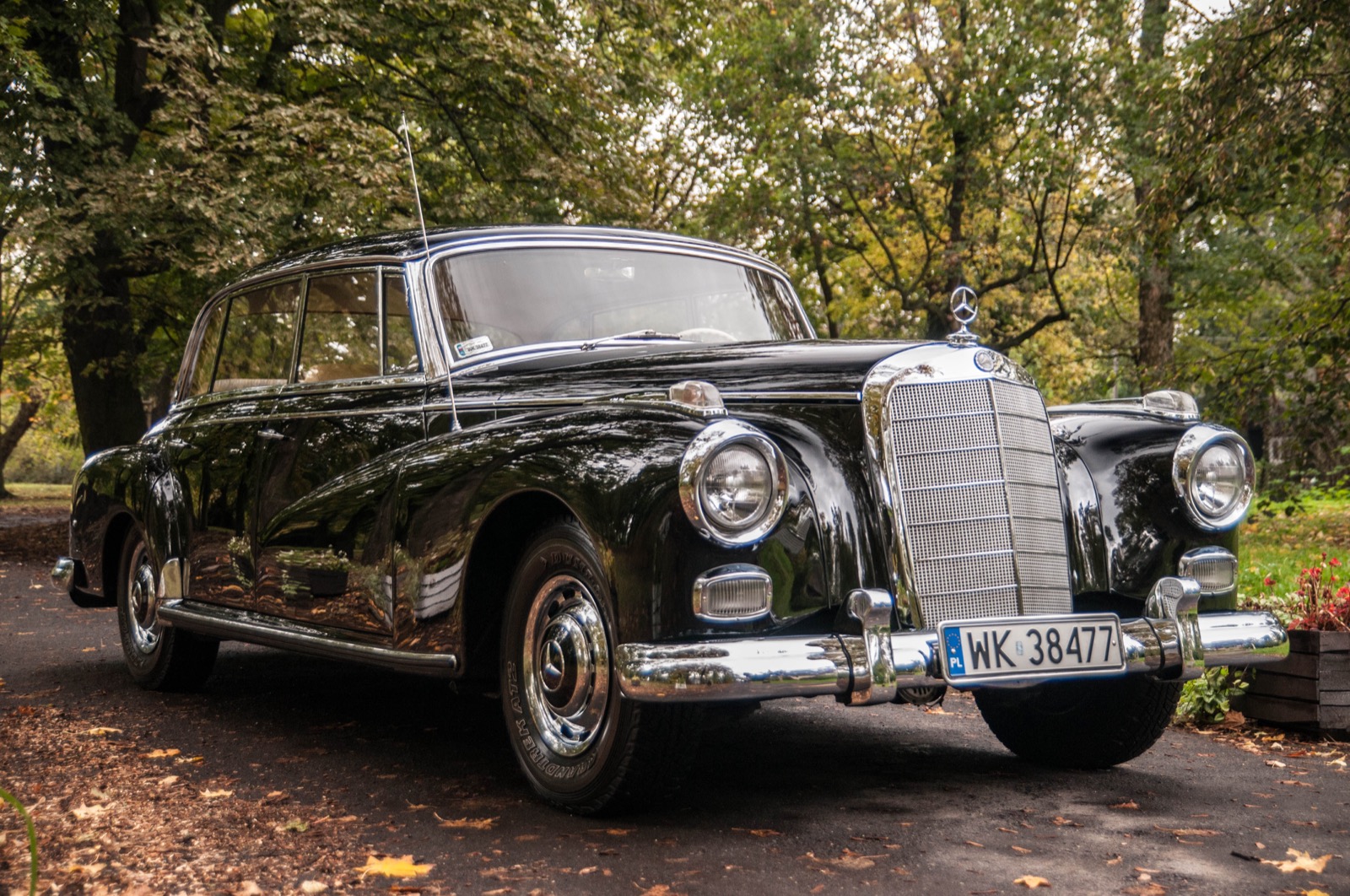 When Mercedes launched the 300 during the 1951 Frankfurt Motor Show, no other car on the market was as refined, modern or luxurious. The war had ended a mere six years earlier and just three years earlier Germany had still been under occupation of the Allied powers. Despite this, Mercedes had set about building a car that would annihilate its competitors with its style and technology.

The 300 Model, codenamed W186 is known to a broader audience as the „Adenauer” after the name of Konrad Adenauer, Chancellor of Germany who ruled the country from 1949 and 1963 and was driven in this car from the beginning of its production.

The aim of the engineers was to build the best car in the world. A lot of emphasis was put on handling refinement. Despite its large size (nearly 5 meters in length), the W186 was supposed to be enjoyable to drive. Its performance was also impressive. With a top speed of a 160 km/h it was the fastest car made in Germany at the time.

Such performance was made possible by a three-litre straight six-cylinder engine, initially developing 115 BHP. In order to keep it reliable in various climate conditions, it was fitted with a sophisticated cooling system, an oil cooler equipped with a thermostat and a cylinder head made of aluminium.

The four-speed manual gearbox was all-synchromesh (later on an automatic gearbox was also offered). The car provided decent comfort even when fully loaded, thanks to load-levelling suspension at the rear axle.

The car was incredibly quiet on the inside thanks to use of various insulating materials. The heating system with several independent blowers was also highly innovative.

The bodywork was mounted atop of a frame chassis, which without a doubt had a positive effect on the durability of the structure. The car was also praised for its generous interior space and decent comfort on rough surfaces.

The Mercedes 300 was also manufactured in a two-door and convertible version.

Four versions of the car were developed, each one of which was gradually modernised: 300a made between 1951 and 1954, 300b (1954-55, engine upgraded to 125 BHP, added brake assistance), 300c (1955-57, new independent rear suspension, automatic gearbox available as an optional extra). The last and most modern version was the 300d, made between 1957 and 1962. It had a longer wheelbase, automatic gearbox fitted as standard and fuel injection. On top of that, power steering and air conditioning could be specified as optional extras. The engine developed a substantial 160 BHP.

Before the car was replaced by the Mercedes W112, 12 190 examples of the „Adenauer” were built. Apart from the Chancellor of Germany, the list of its famous owners included i.a. the Shah of Iran Reza Pahlavi, King of Greece Paul I and Emperor of Ethiopia Haile Selassie. The 300 model was also popular among the stars of show-business such as for instance Ella Fitzgerald or Gary Cooper.

Nowadays, this Mercedes is appreciated for its durability and comfort, which even today impresses every person who has a chance to drive it.

Mercedes Benz 300 d “Adenauer” presented by Ardor Auctions is probably the most unique car that could be seen on Polish roads during the years of Polish People’s Republic. It’s a tangible evidence that in countries where there are no luxury car makers, cars with three-pointed star made in Stuttgart are always used for official purposes, regardless of the prevailing political system. Secretaries of communist parties in Asia, African dictators, Chancellor of Germany and First Secretary of the ruling communist Party in Poland in the 1950s and 60s have at least one thing in common – every single one of them was driven in a luxury limousine made by Mercedes-Benz.

In the second half of the 1950s Polish state decided to purchase 10 examples of the biggest limousine made by the Stuttgart-based manufacturer, that is the Mercedes-Benz 300d, also referred to as the Adenauer. As a result of this, according to administrative documents of the official state cars in the state fleet, Polish Ministry of Internal Affairs had four limousines, also known as “carriages”, at their disposal, whereas two of them served in the Central Committee of the Polish United Workers’ Party (KC PZPR). On top of that, two four-door Adenauers with an retractable roof were also ordered to serve at various parades and official events. Polish state-owned Adenauers were used for twelve years in state structures as means of transport for the most important party officials, including Cyrankiewicz and Gomułka, during their official journeys around Poland as well as official events. They were often accompanied by smaller W111 saloons or Soviet ZIMs. Adenauers were also used as a means of transport for foreign country leaders who visited Poland. Eventually limousines were retired in 1971 and 1972 and sold on government tenders. However, as maintenance of their sophisticated fuel-injected engines was very demanding, they were problematic for their new owners – just like any other “western” car in a country where availability of spare parts and trained car mechanics was virtually non-existent.

The Mercedes 300d, chassis number 189010A 8501134 presented on the Winter Auction was one of several Adenauers ordered by the Polish government in 1959. The order itself was very unusual. Standard equipment of the “d” version included power steering and automatic gearbox, but Adenauers sold to Poland did not have those features, probably for two reasons: one of them was practicality. Drivers of the Government Protection Bureau (BOR) were trained on Soviet-made cars, which usually were equipped with manual gearboxes and had no power-assisted steering. Another reason was a technical one: manual gearbox was easier to maintain, whereas lack of power steering meant there was one potential issue less for the mechanics.

The car offered on auction does not come have a record documenting the period between the moment of sale in either 1971 or 1972 and 1978. Together with the car we were given a document issued by a regional office of the Polish city of Pułtusk, which confirms that it was sold in 1978 and registered in Pułtusk with a number plate TP 7376. In 1981 it was already registered with a number plate 050 4294 and was sold to a new owner from Przasnysz. It went off the road due to an engine failure, which is confirmed by a copy of its registration certificate no. G 0145428. The Adenauer was sold again in 1990. This time it was exchanged for 750 vouchers issued by a Polish bank PKO. Sold again in 1992, this time in Warsaw, its sales agreement is complemented by a document signed by an expert from the Polish Automobile and Motorcycle Association (PZM), saying that at the moment of sale the engine was not physically in the car, had no fittings and the body was also partially disassembled. Its next owner owned the Adenauer until 2012. In the hands of its current owner, the car was thoroughly rebuilt, its bodywork was repainted using its factory paint codenamed 40-schwarz, whereas its interior and chromed parts were completely restored. Complete chassis and engine, which was not in the car when it was bought, were also rebuilt from the ground up. The Mercedes was also fitted with modern convenience-enhancing features such as radio or hazard lights. Everything has been fitted in such a way so that it can be easily removed. At the moment, the Adenauer is not registered as an antique. The car comes with an original letter from the Polish branch of Mercedes-Benz confirming its Polish provenance.

This is a unique and one-of-a-kind opportunity to purchase one of the very rare official state limousines with a remarkably colorful history. The car presented on the Winter Auction is the only existing and restored example of all hardtop 300ds originally sold in Poland.
[/av_textblock]