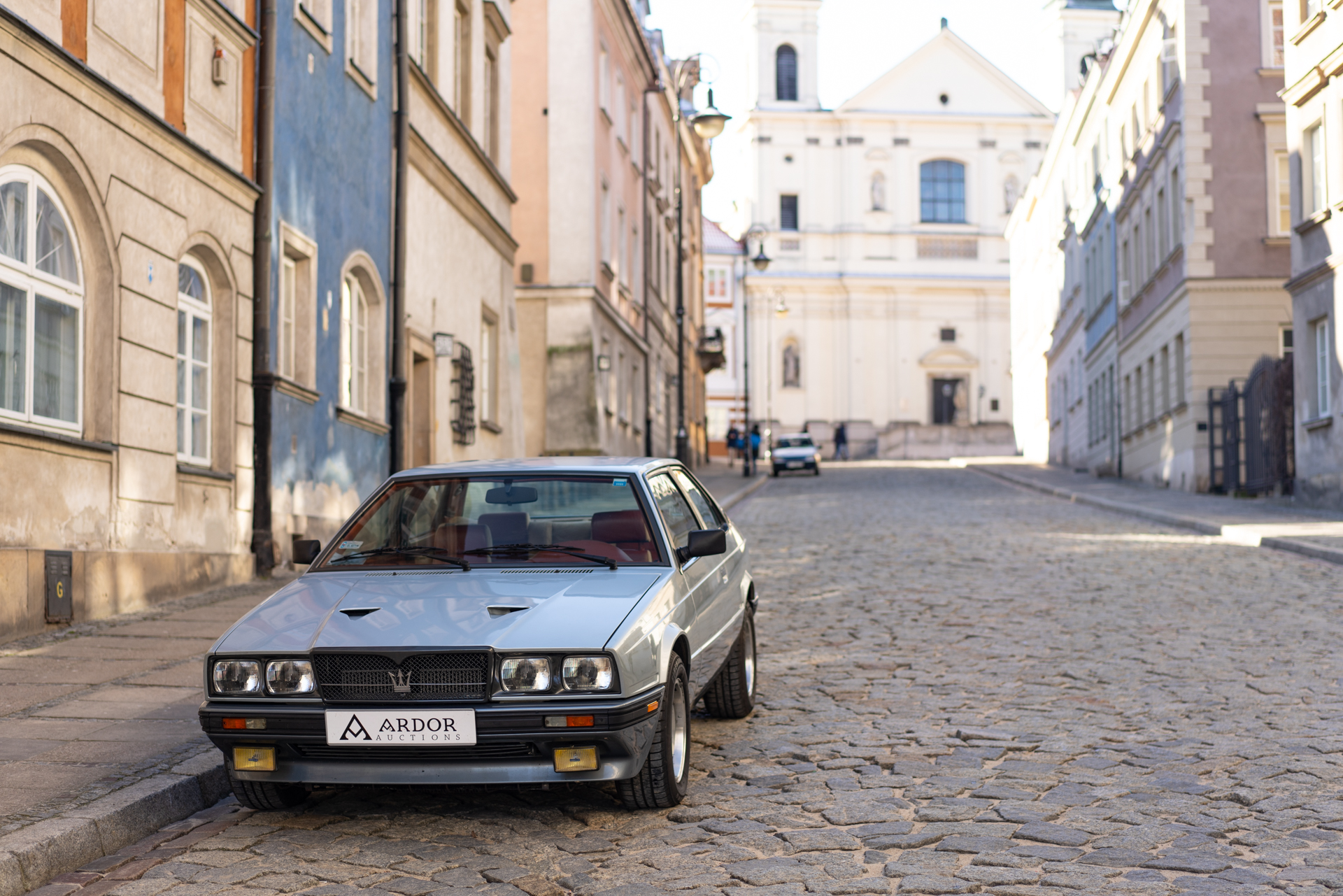 – Bodywork and interior in good condition

– The car was serviced in Poland

The history of the Biturbo model began in 1981. It was an idea, thought up by De Tomaso, new owner of the Maserati Brand, to win over more buyers by filling the gap in the world of Italian automotive industry between cars for masses – such as Alfa Romeo and Lancia, and supercar makes, including Ferrari and Lamborghini. The lines of the car’s small body, initially avaiable only as a two-door coupe, referred to the already well-known Quattroporte sedan designed by Giugiaro. After a couple of years, the company decided to expand its line-up with a convertible version designed by the Zagato studio. The interior was characterised by luxurious finish, featuring leather and wooden elements, as well as rich equipment offer. One of the most characteristic elements was an elegant clock located on the dash between the air vents. Initially, owners of the Biturbo could choose one of two engines with three valves per cylinder, both powered by carburettors. The first of them was a 180-horsepower 2-litre V6 motor with dual turbines, designed for the Italian market, taking into consideration tax regulations at the time, which treated vehicles with displacement up to around 2 litres rather favourably. Buyers from outside Italy could also choose a 2.5-litre 190 horsepower engine. Later on, the line-up was complemented with fuel injection models, along with a 2.8-litre variant. The car’s design was also refreshed three times – in 1985, 1988 and 1991. Despite criticism faced by the company due to quality mishaps plaguing the Biturbo series, these models have rather sizeable group of fans, who love their exclusive nature combined with unique characteristics of a biturbo engine.

The Maserati Biturbo Si was sold solely in Italy. The car was characterised by its dual colour scheme, additional air intakes in the bonnet, spoilers, as well as better performance, enabling it to accelerate from 0 to 100 km/h in around 6 seconds. The presented car was imported from Italy in 2016 and purchased by its current owner in 2017. The new owner embarked on improving the car’s technical condition by replacing its valve train, exhaust system, all gaskets in the engine, high-voltage cables, as well as all fluids and filters. They also adjusted the valves and replaced all the seals, regenerated the steering gear, purchased new door seals, as well as tailgate and bonnet actuators. After such an extensive service, the Maserati left the garage only in good weather. The upholstery and the bodywork are impeccable. The car is registered as a normal, non-historic vehicle, it is also insured and has a current certificate of roadworthiness. A Biturbo Si in such a great condition is definitely a treat for the lovers of Italian style, as well as the edgy, wedge-like shapes popular in the 1980s.
[/av_textblock]