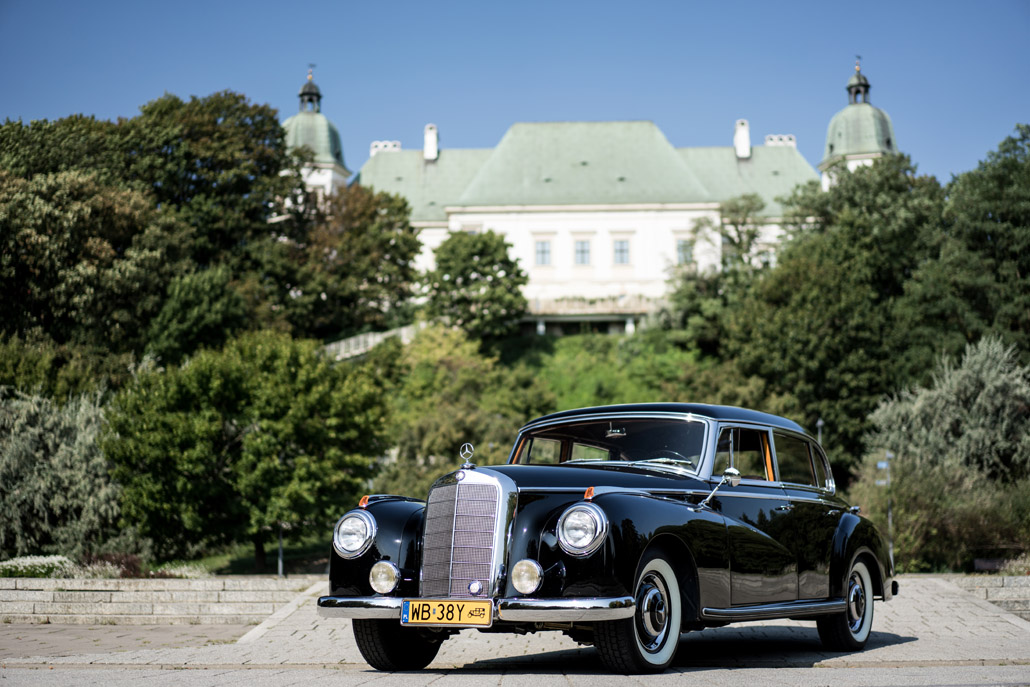 – One of the finest limousines of its time

– Sold by a collector and brand aficionado

The Mercedes-Benz Typ 300 went on sale in 1951. It is often identified as an Adenauer after Konrad Adenauer, the first Chancellor of the Federal Republic of Germany, who employed six custom versions of this vehicle. It remained in production for 11 years and bore factory codenames W186, W188 and W189. Thanks to an X-frame chassis it was easy to play with the bodywork and meet individual customer requirements. The Adenauer was available as a four-door saloon, coupe, convertible or roadster. All versions were powered by a brand new engine with an aluminium cylinder head displacing 3 litres. It was mated to a four speed, all-synchromesh gearbox. Total power output of the straight six ranged from 115 to 175 BHP depending on the model and whether the engine was fitted with a carburetor or fuel injection. Over the years, the design was overhauled and improved, but some engineering solutions were implemented already at the design stage. Designed to give reliable service under prolonged hard use, the engine featured deep water jackets, thermostatically controlled oil cooling, copper-lead bearings and a hardened crankshaft. Later model years could be ordered with an automatic gearbox, power steering, power brakes and air conditioning. Interior was truly luxurious and featured leather upholstery or inserts made of real wood. Interior was also extremely well soundproofed and praised for its spaciousness. Its chassis was world-class too, with good body control and compliance on rough roads.

The Mercedes offered by Ardor Auctions has been in Poland since 2009. It was imported from France in original conditions with some minor rust spots. Since it was fully complete, it was a perfect base for restoration. Despite the fact that the car was generally in an operable condition, the owner decided to have it fully restored, which took 18 months. A thorough visual documentation was made before, after and duringthe process. All body and underbody parts were fitted to this particular example at the factory and were repaired if needed. This refers mostly to chrome parts, which were preserved in a very good condition. Seats were reupholstered using the same type of material with the same pattern as that originally fitted to the car. Becker Mexico stereo was refurbished at Mercedes headquarters and was fitted with an interface to make it compatible with modern electronics. The car is fitted with rear load-leveling suspension and a pedal-operated central lubrication system to keep friction points silent. Mechanically, the Adenauer is in immaculate condition. It took part in a number of classic Mercedes events and classic car rallies in Poland and abroad, which is proven by rally plates and photographs. It was also featured in a historical movie made by a famous polish director.

The Mercedes-Benz Typ 300 was one of the finest limousines of its time. It was hugely popular among the rich, famous and influential people such as President of the United States John F. Kennedy, King of Greece Paul I, famous architect Frank Lloyd Wight, Led Zeppelin guitarist Jimmy Page, singer Ella Fitzgerald or actor Gary Cooper.
[/av_textblock]