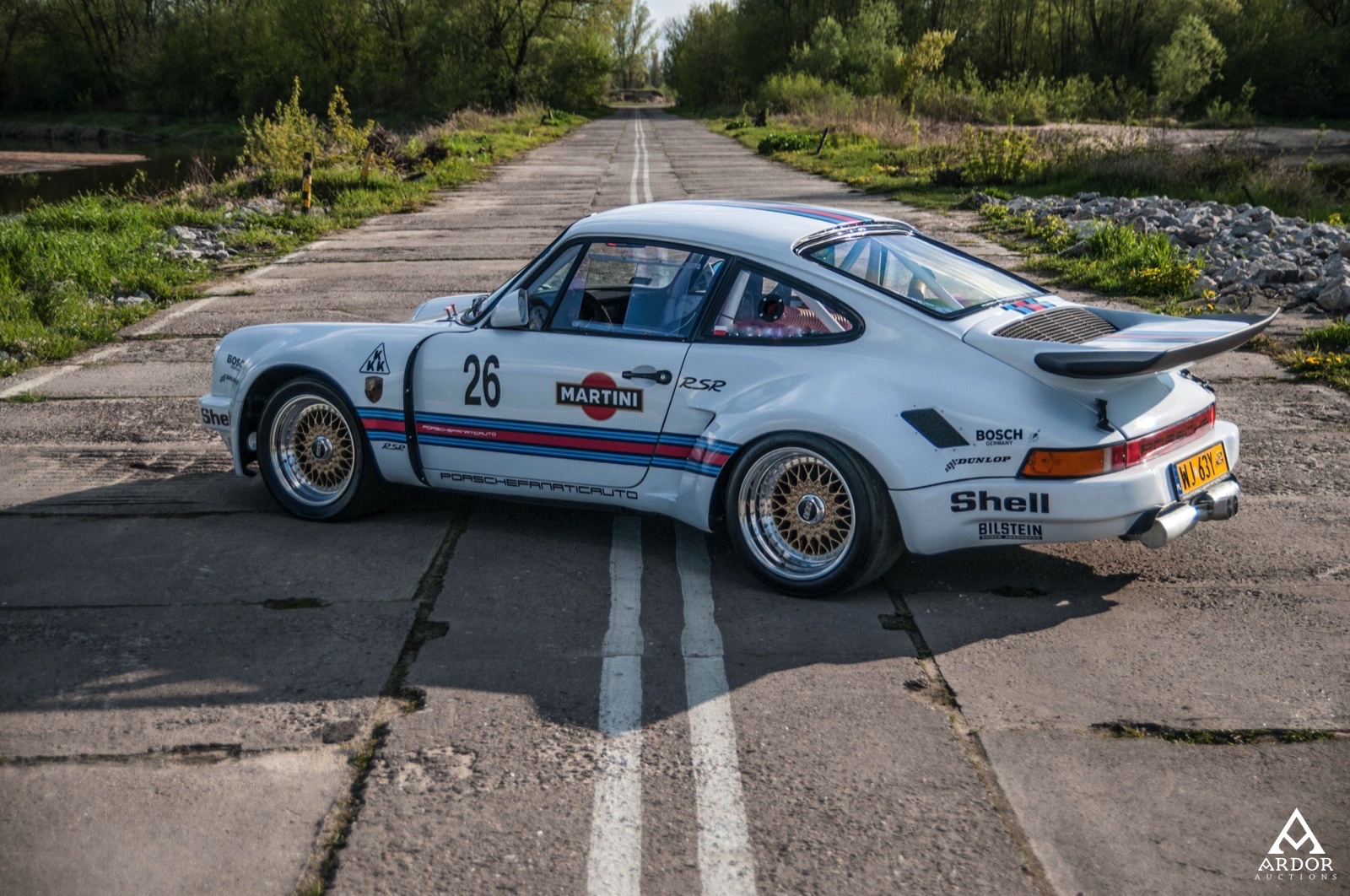 The Carrera RS was manufactured from 1973 and was the first Porsche 911 which combined driveability of a road-going sports car with dynamic abilities similar to those of a racing car. Its name was a homage paid by the Zuffenhausen-based manufacturer to the racing series Carrera Panamericana, held in Mexico in the 1950s. RS, on the other hand, stands for “Rennsport” – a German word for “racing”.
A track-only version called RSR 3.0 was created to compete in the FIA Group 4 category. It was a development of the RSR 2.8. Its racing career began in 1973. In order to make the new car compliant with homologation rules, its aerodynamics had to be changed. Rear spoiler from the road-going version, commonly referred to as the “ducktail”, was replaced with a tail fin. On top of that, wheel arches have been flared.
Carrera RSR 3.0 was powered by a 3-litre, air-cooled, horizontally opposed engine. It was equipped with a mechanical fuel injection by Bosch, which enabled it to produce 330 BHP at 8000 rpm. Compression ratio was also increased to 10:3.1. Twin-exhaust was borrowed from the RSR 2.8. Coil springs in the suspension were made of either steel or titanium. They were hidden behind a hefty set of wheels, 15-inch at the front and 14-inch at the rear. Power was transferred to the rear axle via a five-speed manual gearbox, which was connected to the engine with a clutch made by Sachs. Several body panels and interior parts were made of aluminium for weight reduction. As a result, the RSR 3.0 weighed just 900 kg. Adding power and getting rid of unnecessary weight made it hugely fast. Top speed was 270 km/h, whereas 0-100 km/h was dealt with in just 5 seconds.
Porsche sold the RSR 3.0 to many private racing teams (i. a. Kremer or Gelo), which were successful in a number of prestigious racing series. Victories in the American IROC series in 1973-74 are worth mentioning here. Overall, just 110 examples of the RSR 3.0 were made. In the meantime, Porsche created a prototype of a turbocharged RSR 2.1 model, which finished second in the 1974 24 Hours of Le Mans.
A spiritual successor to the aforementioned cars was the 964 Carrera RSR with a 3.8-litre flat six, which entered many racing series from 1993. Today, all three of them have a special place in the racing corner of Porsche’s hall of fame.

The Porsche 911 RSR offered at the Rozalin 2016 auction is a car that stands out of the crowd. This replica was built with meticulous attention to detail and it took its current owner about 18 months to complete it. Currently, the car is finished and ready to compete in various sports events. The base for this project was chosen very carefully. The donor car was shipped from the United States with converting it into a replica of the legendary 70’s racecar in mind. 930-gen Porsche 911, which served as a base for this project, was completely disassembled, its body sandblasted, repainted and fitted with body kit and roll cage. The car is powered by a classic carbureted unit, which was rebuilt using genuine, high-quality parts by an experienced technician. Estimated power after engine overhaul is rated at 265-270 BHP. The car weighs only 1000 kg and has a new, custom-made Bilstein suspension, which makes it a hugely competitive vehicle, ready to win competitive sections and beat even more modern vehicles. This car is registered as a classic vehicle.