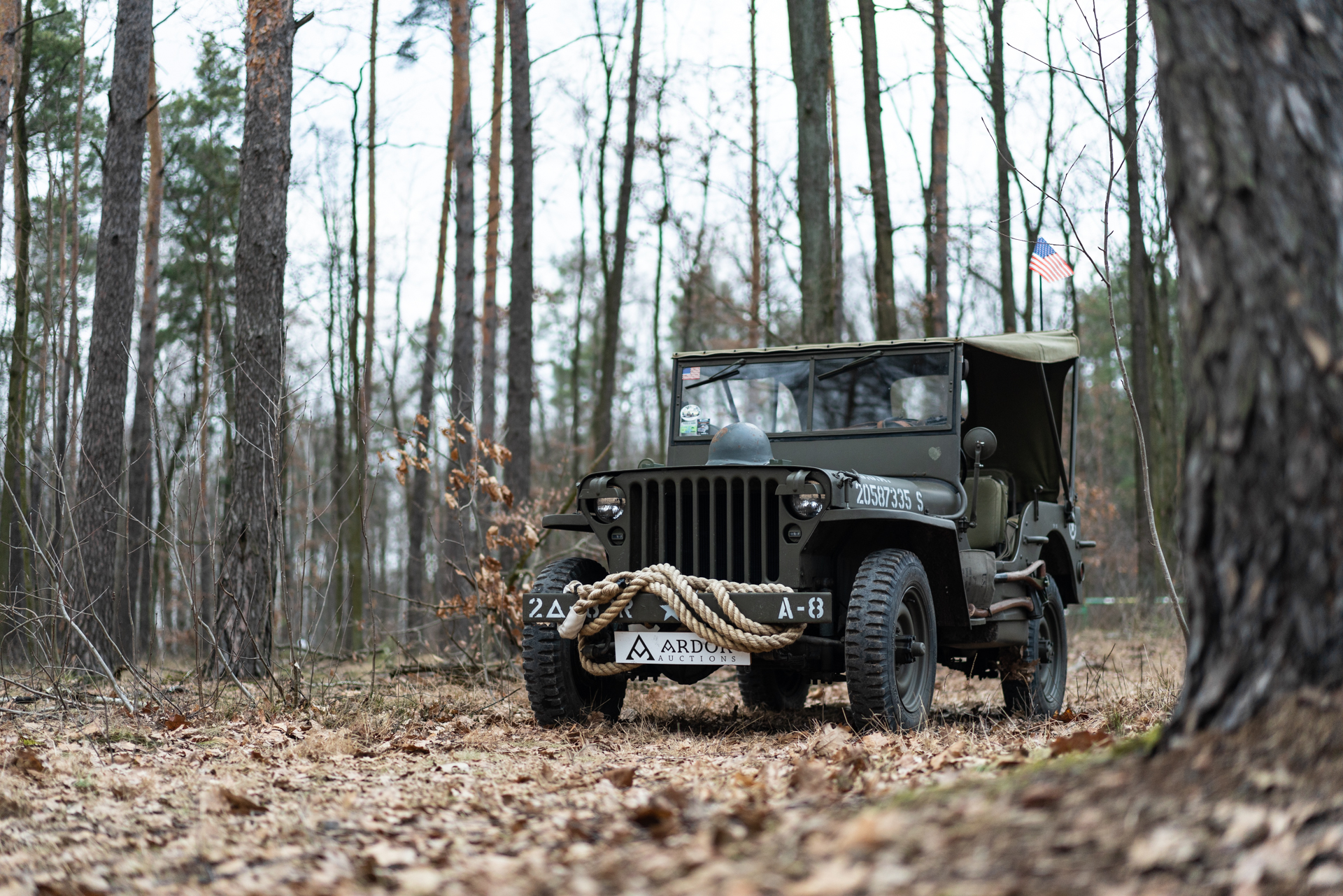 – Restored to its original condition

– Features interesting accessories from its time

In the first half of 1941, the American Army chose Willys’ design as their basic all-terrain vehicle, which led to ordering more than ten thousand vehicles from Willys-Overland in July that year. The manufacturing of an improved standard model – Willys MB, nicknamed “Jeep” – launched soon afterwards. Given the sheer number of orders for the war effort, the company quickly realised that they need another manufacturer to make their car. In November 1941, this task was entrusted to Ford – the company received the Willys documentation free of charge in exchange for their promise that they would make these cars only for the US Government. Ford GPW (”W” stands for “Willys”) had only some minor changes compared to the original, and the parts were interchangeable. The twin models were widely used by all Allied armies throughout the war, followed by their widespread use by civilian users in numerous countries. The Jeep was not designed as a combat vehicle, so the majority of them did not have any weapons at all; however, all of them could be equipped with various kinds of weapons. It was powered by a 2.2-litre in-line flathead engine, generating a maximum power of 60 horsepower at 4000 RPM. The power was transferred to the rear wheels, with switchable front-wheel drive and a three-speed transmission. 639,245 standard Jeeps were made in total, including 361,349 Willys MB models and 277,896 Ford GPWs. There are several theories as to the origin of the name “Jeep”. One of them ties it to the slang of military technicians from the 30s, referring to any new vehicle brought in for testing. Others believe that the name comes from a magical creature from Popeye – Eugene the Jeep, known for its amazing skills. There were some who pointed to the phonetic version of the name of the vehicle’s prototype – GP – or an abbreviation of “General Purpose.”

The 1942 Ford GPW was transported to Poland directly from the United States. It was stated that the car was supposed to be used by a fire brigade in the US; however, the exact story of this vehicle remain a mystery. In Poland, the car has undergone a professional and comprehensive restoration, which made it run again and brought it back to its former glory. After restoration, the car was bought by an automotive aficionado living near Warsaw, who decided to further improve its condition by replacing the transmission with a new – old stock – original part, as well as by adding some accessories, such as a 5-metre aerial, a fire extinguisher and a fuel can. The Jeep was used on a regular basis and the car’s owner participated in numerous historic car rallies. It is one of the best-maintained Jeeps in Poland. A historic World War II-era all-terrain vehicle is a great treat not only for the fans of all things military, but also every driver who sees adventure and something more than conventional leisure rides in their oldtimers on weekends.
[/av_textblock]