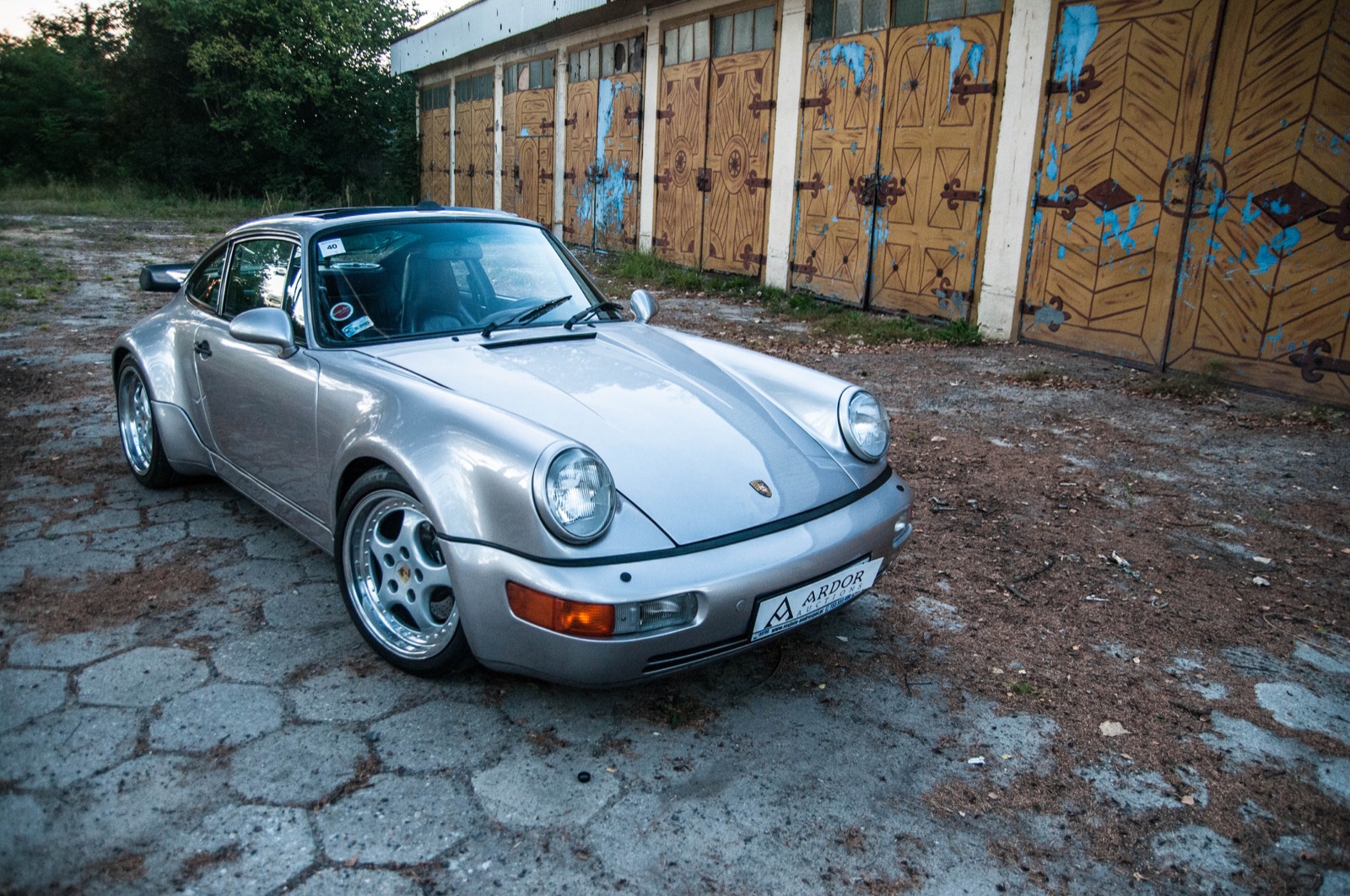 The basic shape of Porsche 911’s body remained nearly unchanged throughout the years. However, the generation codenamed 964, which debuted in 1989, shared only 15 per cent of the parts with its predecessor. Even the styling, with integrated bumpers, was definitely more modern than that of the previous model. On top of that, numerous technical innovations were introduced with generation. The 964 was the first 911 available with a Tiptronic transmission and four-wheel drive.

In case of the Turbo version, revealed in 1990, power was sourced from a six-cylinder horizontally opposed engine displacing 3,3 litres. In fact, it was a heavily modified version of the engine from its predecessor, the 930, with improved performance and reduced turbo lag. Power was rated at 320 BHP and was transferred to the wheels by a five-speed manual transmission. In 1992 a more powerful, 381 BHP Turbo S version hit the market. It was distinguished by having a much more raw character, less creature comforts, as well as lower and harder suspension. Year 1993 marked significant changes. The new engine of the Turbo had increased displacement and power to 3,6 litres and 360 BHP respectively. These models were only produced during the model year 1993/1994. With just 1500 examples ever to have left the factory, this is one of the rarest versions of the 911. By comparison, 3660 examples of the 3,3 litre version were produced, which is still a remarkably low number. It took the factory 8 days to produce a single 911 Turbo. But the rarest version of all is the Turbo S: only 86 examples of this 3,3 litre-based car were made, whereas the last 90 examples of the Turbo 3.6 were modified (to 385 BHP) and sold under a 3.6S moniker. This version could also be specified with a “slant nose”, i.e. flattened front fascia with pop up headlamps. The 964 Turbo was deemed the best driving Porsche since the 959. The Turbo 3.6 was featured in a comparison test against the Ferrari Testarossa and the Toyota Supra in the August 1993 issue of “Road and Track” magazine. The car was praised for its aggressive character, a strong tendency to oversteer and remarkable willingness to gather speed.

This 1991 3,3-litre Porsche 911 Turbo presented by Ardor Auctions is a car with a unique history, which is as interesting as the first years of free market economy in Poland. It left the factory on May 27th in 1991, featuring an unusual Silver Rose body paint. The first intriguing fact related to this particular car are its chassis numbers, also known as VIN numbers. The car was owned by a single Cracow-based family from 1992 to 2014. Initially however, it was shipped to Poland as an American specification vehicle. Later on it was converted to European spec and was given a new, European chassis number WP0ZZZ96ZMS480606.

The car was registered for the first time with this VIN number on October 29th in 1997 with a registration plate KVT 0911. Being a part of a collection comprising four Porsches, this example was used sporadically till autumn 2006, when it had a minor accident. As a result of it, left wing of the car was damaged and it was towed away to a guarded car park. At the time, its mileage was 27 500 miles. Due to some family feuds, the owner of the car decided to leave it for 8 years in the aforementioned car park. Despite many offers made by visitors of the car park to buy the damaged Turbo, the car had not been sold until 2014. Its new owner brought the car back to the Polish roads.

Thorough cleaning of the car after it had been sitting for many years revealed that the damage was smaller than expected. Body and paint restoration was entrusted to Borsiak workshop based in Konstantynów Łódzki, the engine was dismantled and rebuild by TB Auto Sport Service, whereas complex suspension job was carried out by Rostex garage. Thanks to great efforts the dirt accrued during 8 years of sitting has been cleaned, therefore the interior has been preserved in its original state and looks marvellous at the moment. This particular example has been fitted with a Techart steering wheel and a gear lever with carbon add-ons. Modified audio speaker system connected to a stereo from the period has also been preserved and works perfectly fine. The car has done 29 000 miles so far. There are two areas which need inspection, that is airbags and air conditioning system.

The Porsche 911 Turbo offered on the winter auction is a fantastic way to start an adventure with classic, turbocharged Porsches, that particular example being fully restored and with low mileage. Its unusual history is an additional benefit.