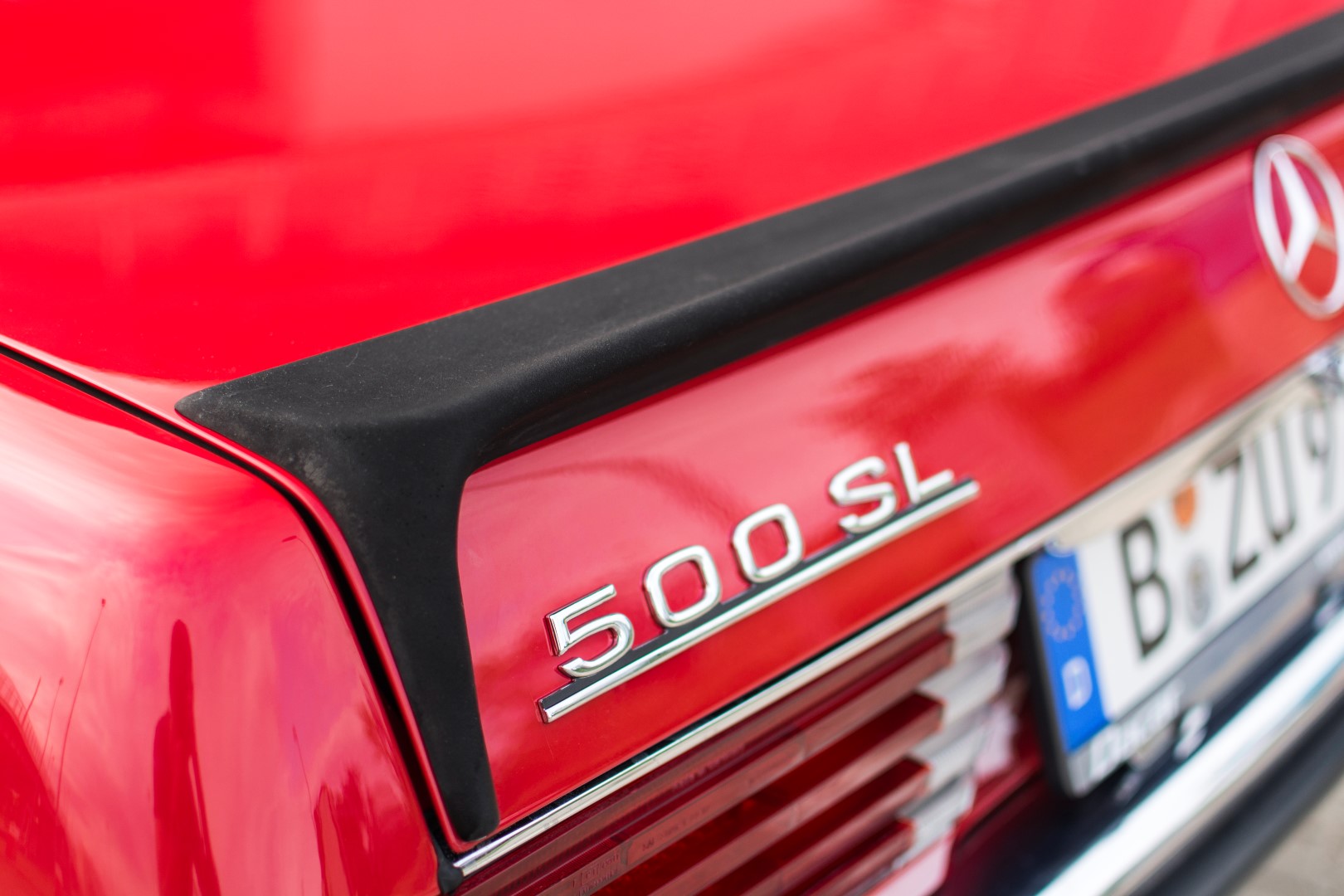 The Mercedes SL of the R107 series was introduced on the market at a time of increasing expectations from roadsters. The new designs were expected to not only have better performance, but also increased comfort and safety. The successor of the „Pagoda” also had a brand new styling. Nevertheless, driving experience remained the top priority for roadsters. That was to be provided by a range of new Mercedes engines. Initially, customers were able to choose only from V8s. The weaker version displaced 3.5l and developed 200 BHP. In 1973, a 4.5l engine with 25 BHP more became available. Later, SLs were also mated to 3.8l and 4.2l engines. The most powerful available engine option, with a displacement of five litres and 240 BHP, entered production in 1980. Due to the ongoing fuel crisis, in 1974, an I6 engine developing 185 BHP was added to the range of engines available for the European versions (the 280 SL). Starting from 1985, the six-cylinder engine featured in the R107 developed 188 BHP with a displacement of three litres. The R107 was highly popular on the North American market. In 1972, a hardtop SLC version was introduced with American customers in mind. In addition to the hardtop, that version had a 36cm longer wheelbase. The American versions also had more prominent bumpers (to comply with the US safety regulations) and different lights. Some engine modifications were also necessary in order to meet the US emission requirements. Only the V8 versions were sold in the US. The weakest of the available engines produced only 155 BHP (the 380 SL/SLC). The 560 SL/SLC variant (with 5.6l displacement) was also available, but the engine power (227 BHP) was lower than in the European variant. The Mercedes R107 was the second longest single series ever produced by the automaker, after the G-class. The series was in production for 18 years until 1989, when it was replaced by the R129. The total production run was 237 287 units of the SL model and 62 888 units of the SLC model.

This Mercedes 500 SL was made in 1984. The car was imported into Poland two years ago from Japan, where it had been exported from Germany. The car is the original European variant. It was recently really well restored. Body works included repairs to trunk floor and to floor underneath the rear bench. The old paint was fully removed and a new paint job of the same colour was done. The woodwork was restored and new seat upholstery was made from very high quality materials, to the original specifications. The dashboard was reconstructed with the use of original materials as used by Mercedes. All the rubber mechanical parts with signs of wear were replaced. The engine was retuned and leak-proofed. The options include automatic air conditioning and an electrically operated mirror.

The Mercedes 500 SL offered by Ardor Auctions is a great opportunity to buy an R107 after general renovation. The prices for that model in Germany occasionally exceed 50.000 EUR. All the customs fees have been paid and the car is ready for registration.