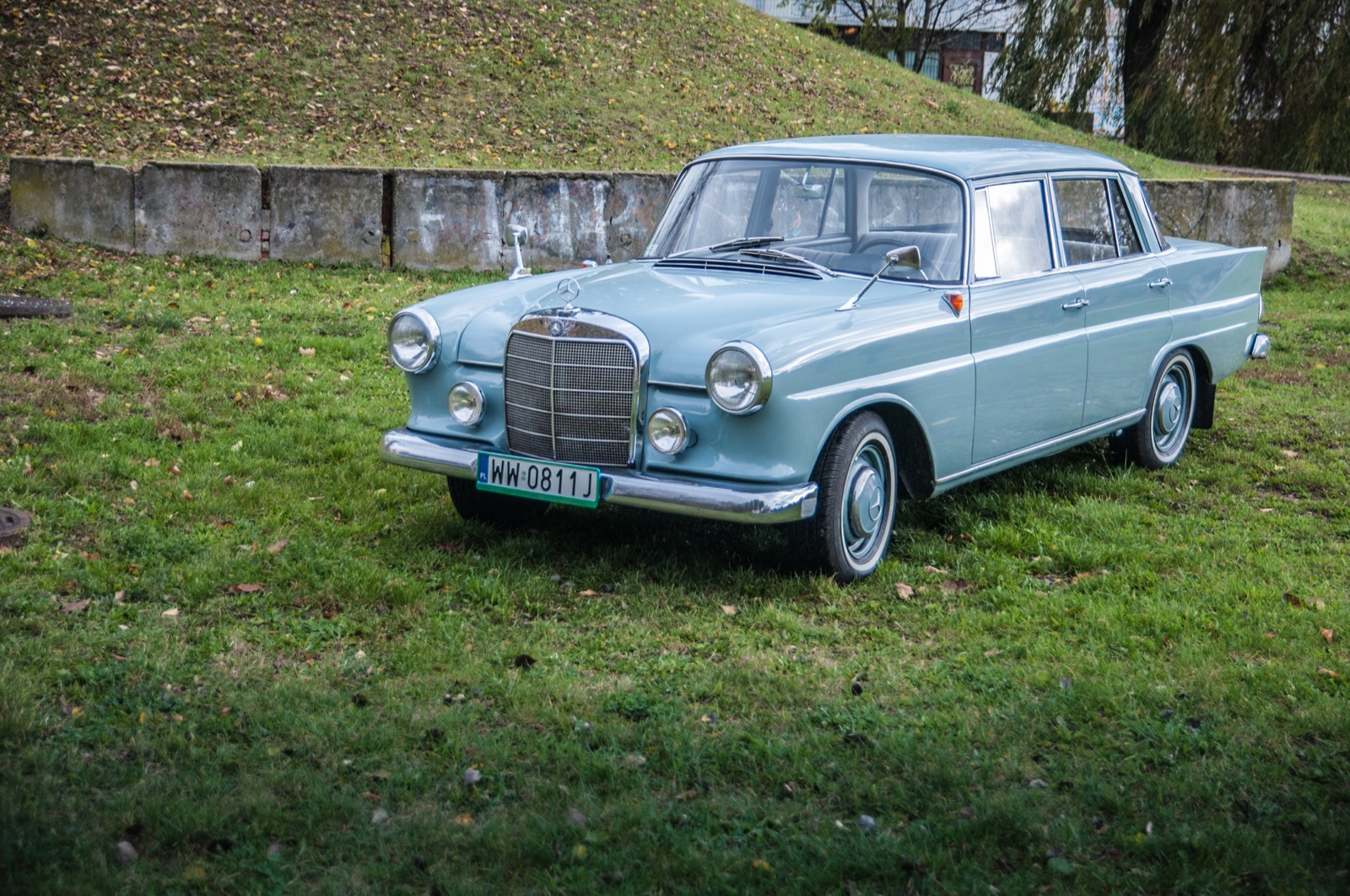 The Mercedes W110, manufactured between 1961 and 1968 was a great success of the starred brand, and at the same time it also was the first model to build the legend of the Class E range. The W110 was characterized by its boot line design, ending with two outstanding fins – the so called fintail, “heckflosse” in German, and was the replacement of the popular Ponton series, of a more conventional design.

Its unibody design was, for the first time in Mercedes-Benz history, tested for passive safety development before the start of the production. It was also the first model made with crumple zones as a main element of body design. The W110 share its body basis with its bigger brothers, the W111 and W112 sedans, the Class S of that time.

Manufacturing of the first series of W110 started in April 1961 with two engine versions. The first one, was the well known Ponton and 190SL petrol M121 engine, and the second was a diesel OM621 unit.

The main advantage of the W110 was its very high build quality and its overall solidity. This Class E ancestor was often chosen in its petrol version by the aspiring West German middle class and by salesmen. Its diesel version contributed to build the legend of mechanical robustnes of Mercedes-Benz. Its was a very popular choice among cab drivers, where taxis often clocked over half a million kilometers without a problem. The diesel engine was also a best-seller. Almost 100 000 first series W110 were manufactured with the diesel specification.

The second series was introduced in 1965, it was known for its bigger and more powerful engines, but for many Mercedes amateurs its had lost many interesting design elements in the modernization process, like for example side indicators gone from the front fenders, or the removal of chrome trim from the fintail. A total of 130 554 petrol 190C W110s were manufactured and nowadays these cars become more and more sought for, especially if kept in original condition.

Presented at the Winter Auction, Mercedes Benz 190C left the factory in June 1964 and was destined for the Swedish market. Ordered in the very popular in the 1960‘s grey-blue color, with a matching grey interior, this 190C has a color combination that certainly is a head-turner.

The main added value of this car is its preserved original condition. Despite 52 years since manufacturing, this car was never completely restored, nor disassembled, and until the beginning of this decade it was used by its previous owner practically on a daily basis.

Its body has a second paint coat until the window lines, and the pillars and the roof of this 190C are exceptionally preserved in the original paint. In terms of bodywork the lower part of the rear fenders was repaired and resealed with body filler, but the rest of the car was preserved in original condition. All chromes on this car need a restoration or repair. Its interior is in a good shape, it is complete but not perfect. A couple of plastic elements, or the dashboard itself need a partial restoration or some corrections. The engine, despite not being very presentable aesthetically speaking, works well, and the car itself is used in Summer for dominical drives.