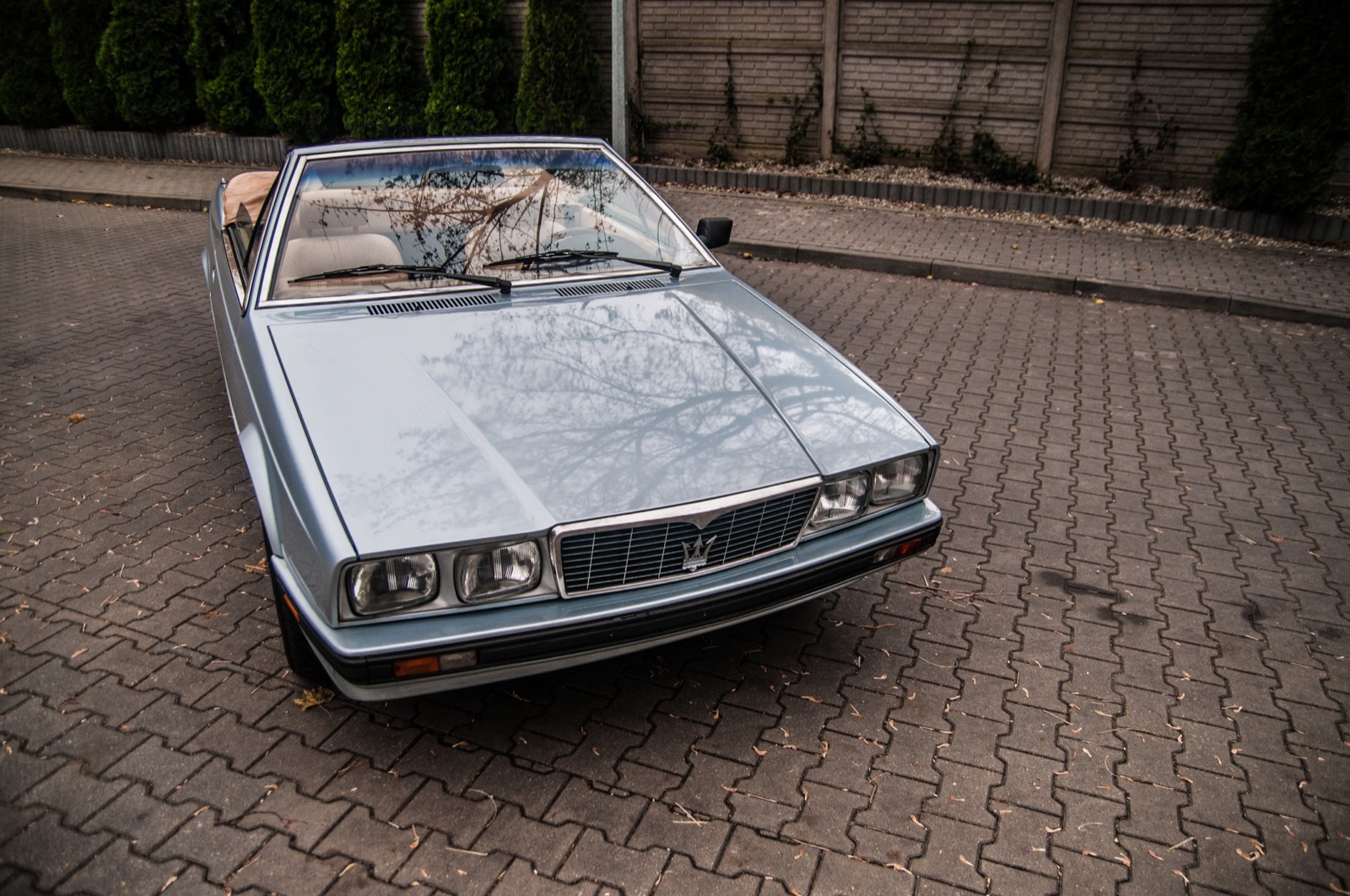 History of this model began in 1981 when the Biturbo model was released. The idea came from Maserati’s new owner De Tomaso. De Tomaso wanted to make a car that would appeal to a broader audience and fill in the gap that existed between Alfa Romeo and Lancia, who made relatively docile vehicles, and makers of thoroughbred supercars, such as Ferrari or Lamborghini.

Its moderate-sized body, initially available only as a 2-door coupe, was styled by Pierangelo Andreani, who was Maserati’s chief designer at the time. Body lines and the overall shape bore a close resemblance to the Giugiaro-styled Quattroporte, which was already on the market back then.

When the company decided to expand the model line-up with a convertible version, they commissioned the famous Zagato Design studio to design it. It had been the first joint project of Zagato and Maserati since over 30 years. Milan-based studio designed the body virtually from scratch. Compared to the coupe version, the wheelbase was shortened from 2600 to 2400 mm and the overall body length was reduced by 11.4 cm to 404 cm. The open-top version was called “Spyder” and it was first shown to a larger audience during the Turin Motor Show in 1984.

Despite the fact that several four seater prototypes had been created, the car that went into production had a 2+2 seat layout. In reality though, this is a two-seat vehicle, with rear seats only really useful as an additional storage space. The interior features sumptuous leather and wood trim and generous standard equipment, such as electric windows and power steering. When it comes to the engine, the Biturbo Spyder was initially offered with one of two units, both of which were carburetted. The first one is a 180 BHP, 2-litre V6 unit, boosted by two turbochargers. This version was destined for the Italian market, where tax regulations favoured engines with less than 2 litres of displacement. Customers from outside of Italy could opt for a 2.5-litre engine generating 192 BHP. Later on, the engine line-up was modernized by adding fuel injection. This resulted in a 5 BHP power hike for the “Italian” version and a 4 BHP power loss for the 2.5-litre engine.

The Biturbo Spyder was manufactured for 10 years between 1984 and 1994. A total of 3076 examples were made, with the 2.5 litre variety accounting for most of the sales. Maserati was heavily criticised for quality issues of the Biturbo series, but despite this, these models have a pretty large fan base who appreciate their luxurious character combined with unique characteristics of its twin-turbocharged engine.

The Maserati Biturbo Spyder offered at the Winter Auction is a car originally imported from the Netherlands. As of today this vehicle has Dutch papers giving the possibility for the new owner to register the car on traditional Polish number plates, or as an antique, or else even abroad. This Maserati left the factory in 1986 in a very attractive exterior-interior color combination of light blue metallic with a light beige interior, including the folding roof cover. Today the spider presents itself in an overall good condition, for a car that was never restored or altered. Minor surface rust spots of at the bottom of one of the doors and at the exterior of the wheel arches have appeared, however they are small and very easy to eliminate. The floor panels as well as the interior of wheel arches and body panels are preserved in a very good condition. The interior is in an excellent shape when it comes to conservation of leather and other elements – seats might only need a proper cleaning.

Plastiques and wooden elements are also in great condition. The only element missing today is the Maserati watch placed in the middle of the dashboard. On the engine and mechanical side, the car has had a starting service done including rebuilding brakes, carburettor regulation and service, and was also fitted with a new gas tank. The soft top has a couple of important scratches and might need to be changed.

The Maserati is a very interesting and rare offer for people looking for originality in Italian motoring. During its three year run for the carburettor version, only 1049 Biturbo Spyders were manufactured.