The original Fiat 500 is the car that motorized post-World War II Italy, but there’s much more to it than that. It also became the icon of the Italian design and lifestyle and one of the most loved cars of all time. History of this legendary vehicle started with its reveal in 1957. The car was eagerly awaited. At the time, Italy was recovering from the war and needed an inexpensive, simple car available for an average worker. Fiat’s range had already included a Topolino back then, which could serve this purpose, but its pre-war design meant it definitely needed a successor. The 600 model, visually similar to the 500, was on sale from 1955. Despite this, Fiat decided to introduce an even smaller car, with lower purchase price and running costs as well as improved usability on narrow streets of Italian towns. The 500 was just 2,97 metres long. Its body was designed by Dante Giacosa, whereas its basic design characteristics included maximum simplicity and a two-cylinder, air-cooled engine. It was mounted in the back and sent its power to the rear wheels. Many of Fiat’s rivals used two-stroke engines back then, but the Italians begged to differ. The engine of the first generation 500 had a 479 cc developing 13.5 BHP. It had a rolling roof fitted as standard and doors that opened backwards. A more powerful Sport version had an engine bored out to 499 cc. An engine of such displacement became standard in 1960, with power increased to 17 BHP. Later models, starting with 500F, launched in 1965, had conventional, forward-opening doors. Over time, the interior of the car was gradually refreshed and many comfort-enhancing optional extras were introduced. Sports versions modified by companies such as Abarth or Giannini were also available. The 500 was also available as an estate (called Giardiniera) or in a rare, doorless Jolly Ghia version, sporting a canopy roof. The car was also offered in New Zealand and USA. An Austrian company Steyr-Puch sold their own variety of the 500, powered by a horizontally-opposed engine sourced from a motorbike. Production of the 500 ended in 1975. For the last 3 years of production the 500 was sold alongside its successor, the 126 (as a 500R version, equipped with, inter alia, synchromesh gearbox). Nowadays it has become a desirable classic car, especially since Fiat has introduced the new 500 in 2008, which was based on a Fiat Panda and bore strong resemblance to its classic predecessor in its styling.

This particular Fiat 500 offered by the classic car auction house Ardor Auctions left the factory in 1972. It was restored by its current owner 8 years ago. A meticulous and thorough restoration was performed on all areas of the car, including bodywork, interior, chassis and various minor parts.

Owners of the car have used it very frequently for long-distance weekend drives ever since the aforementioned process was completed. As a result of this, the car is not immaculate, but well preserved in a condition that makes it totally usable for daily driving during the season. During restoration numerous body panels were replaced with brand new ones, including but not limited to the whole front of the car. The vehicle itself was repainted in gorgeous red colour featured in the factory Fiat colour palette. The bodywork has a few signs of wear and tear in various places, but the paintwork is in very good shape nevertheless.

The interior has been newly upholstered using very high quality leather, which is more pleasant to the touch than the original leatherette. Its vanilla colour is a fantastic contrast to red colour of the bodywork. The engine has been rebuilt from the ground up and runs perfectly now.

The Fiat 500 is registered in Poland and is a perfect example of a cult small weekend car. 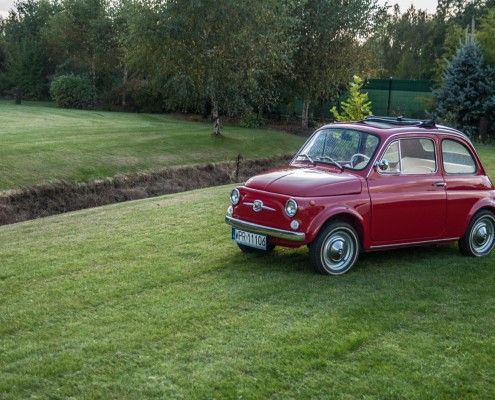 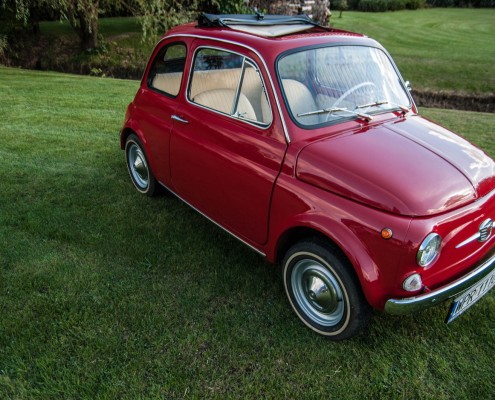 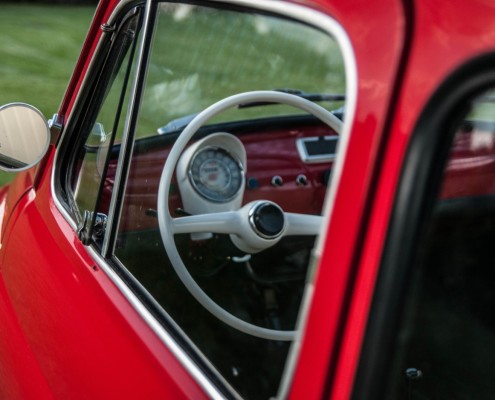 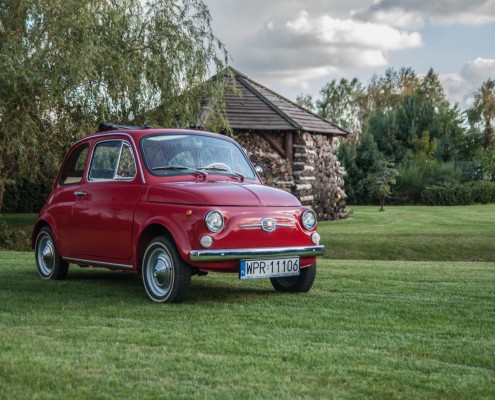 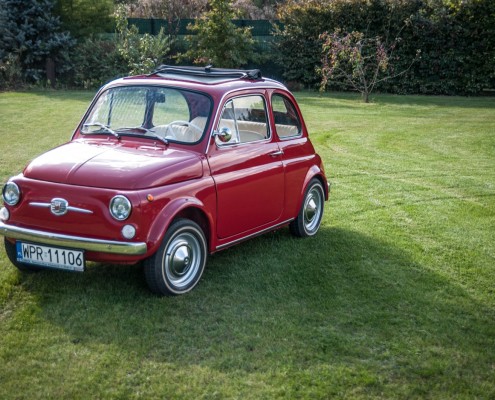 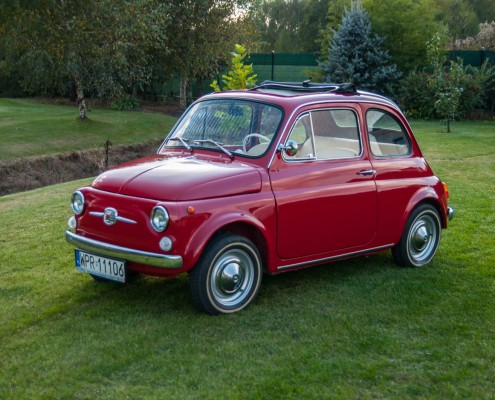 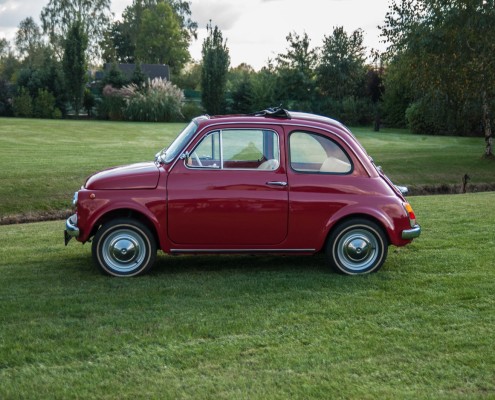 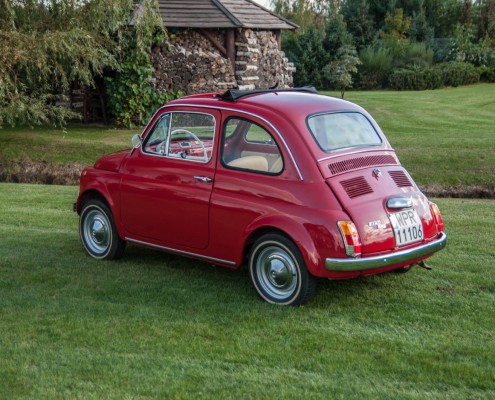 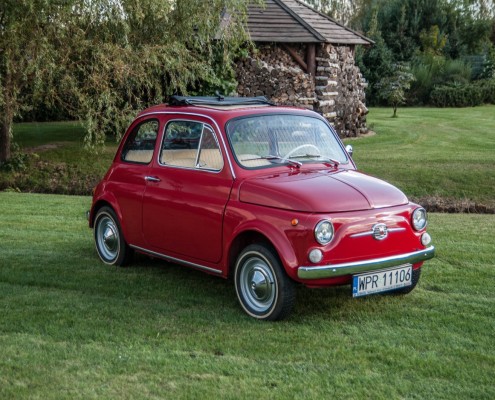 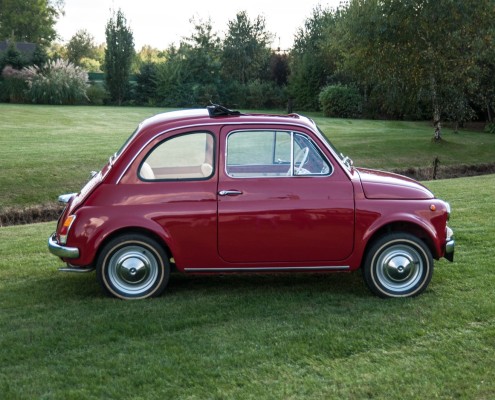 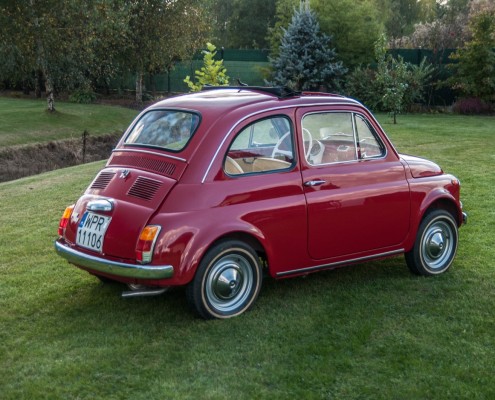 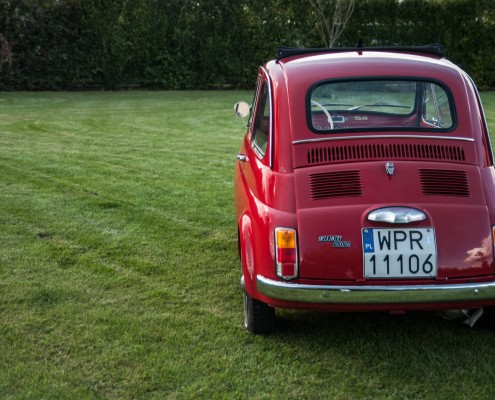 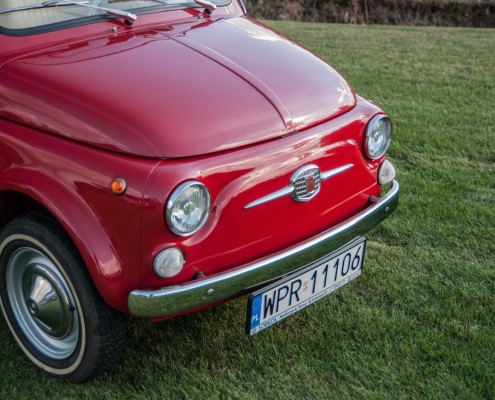 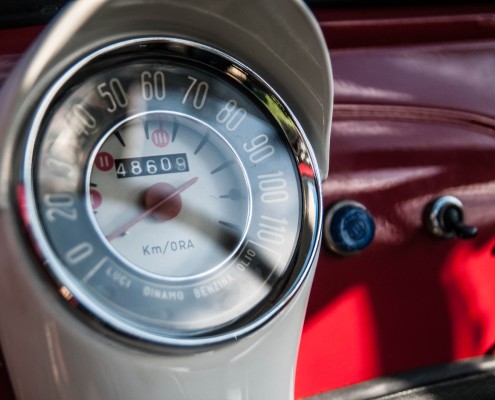 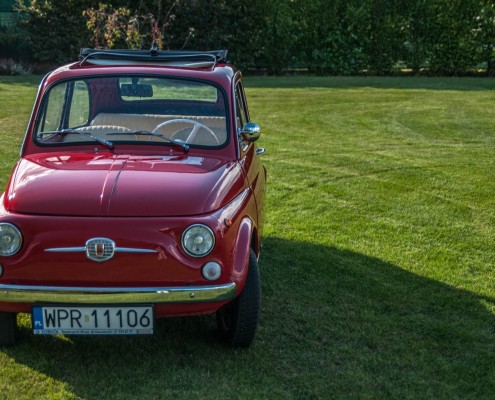 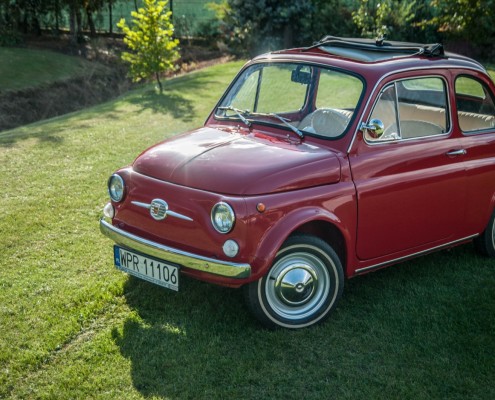 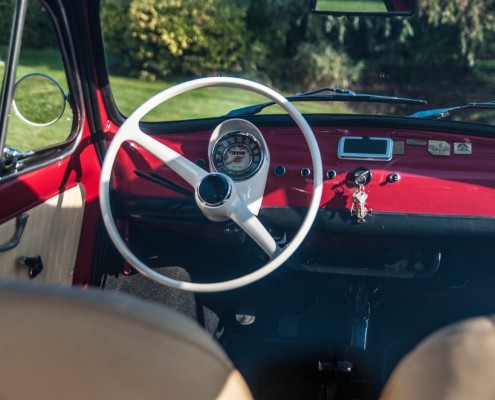 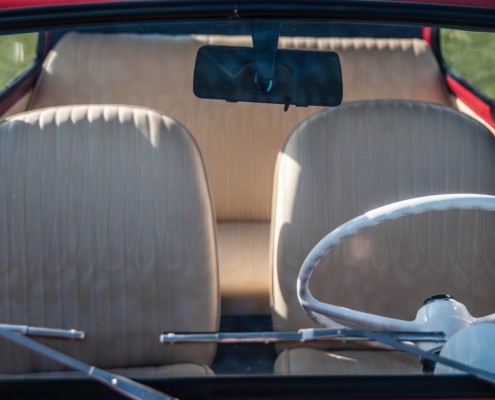 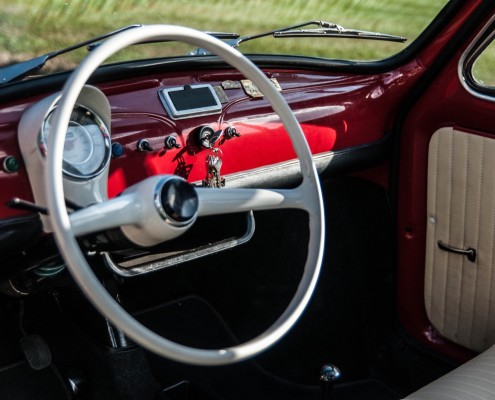 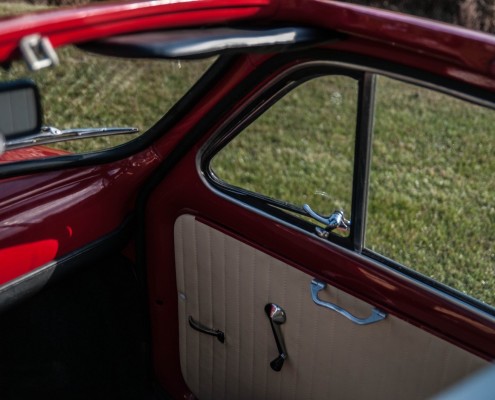 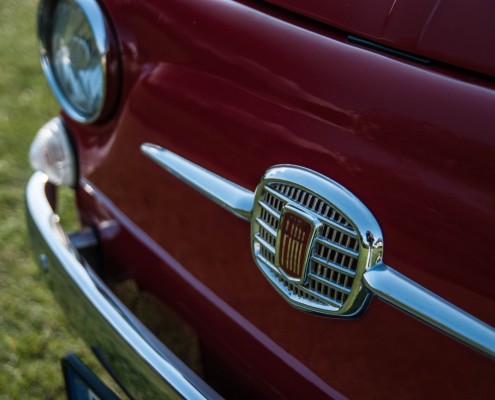 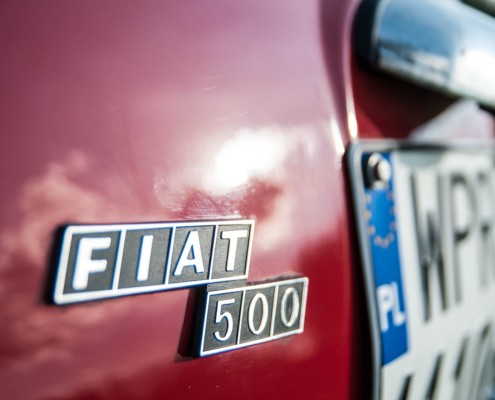 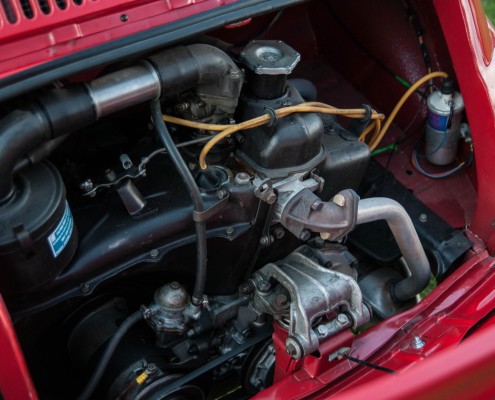 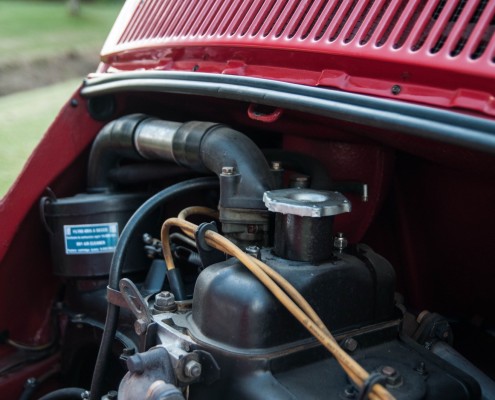 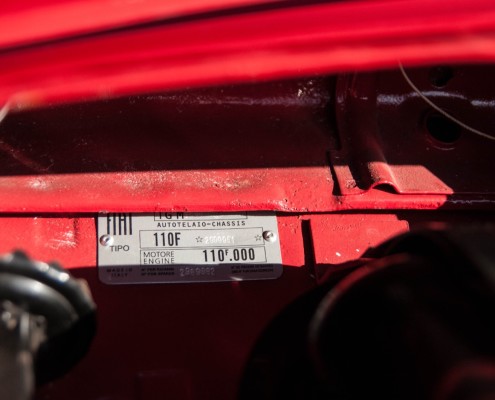 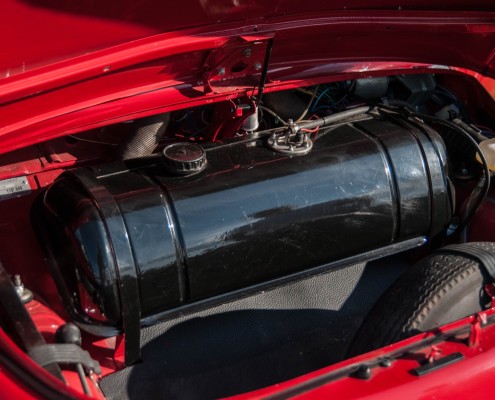 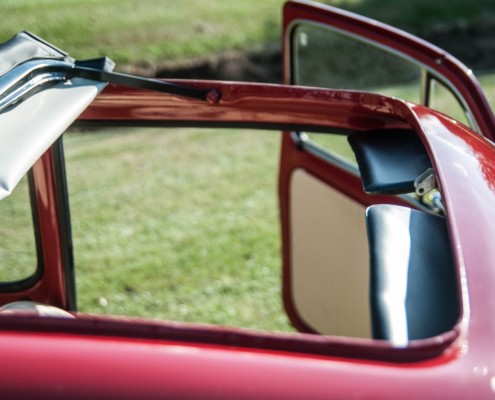 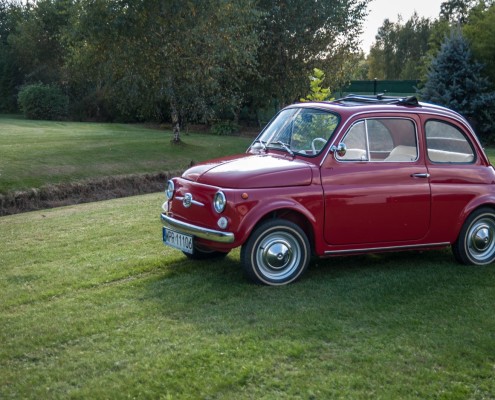 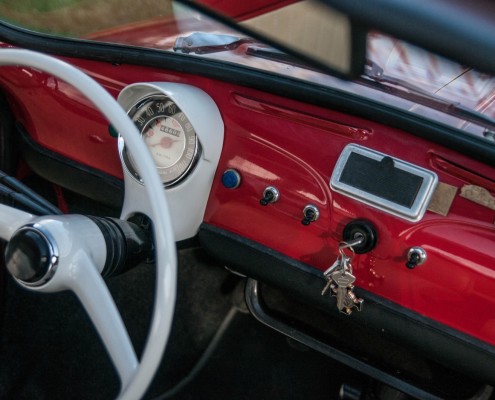 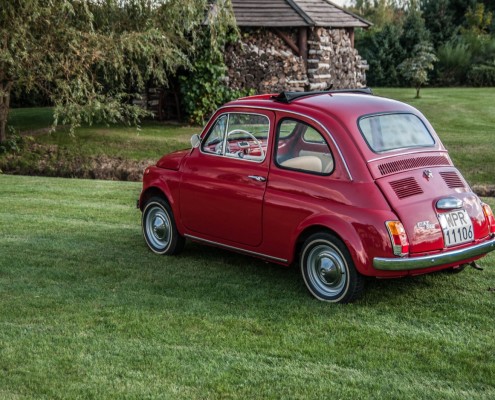