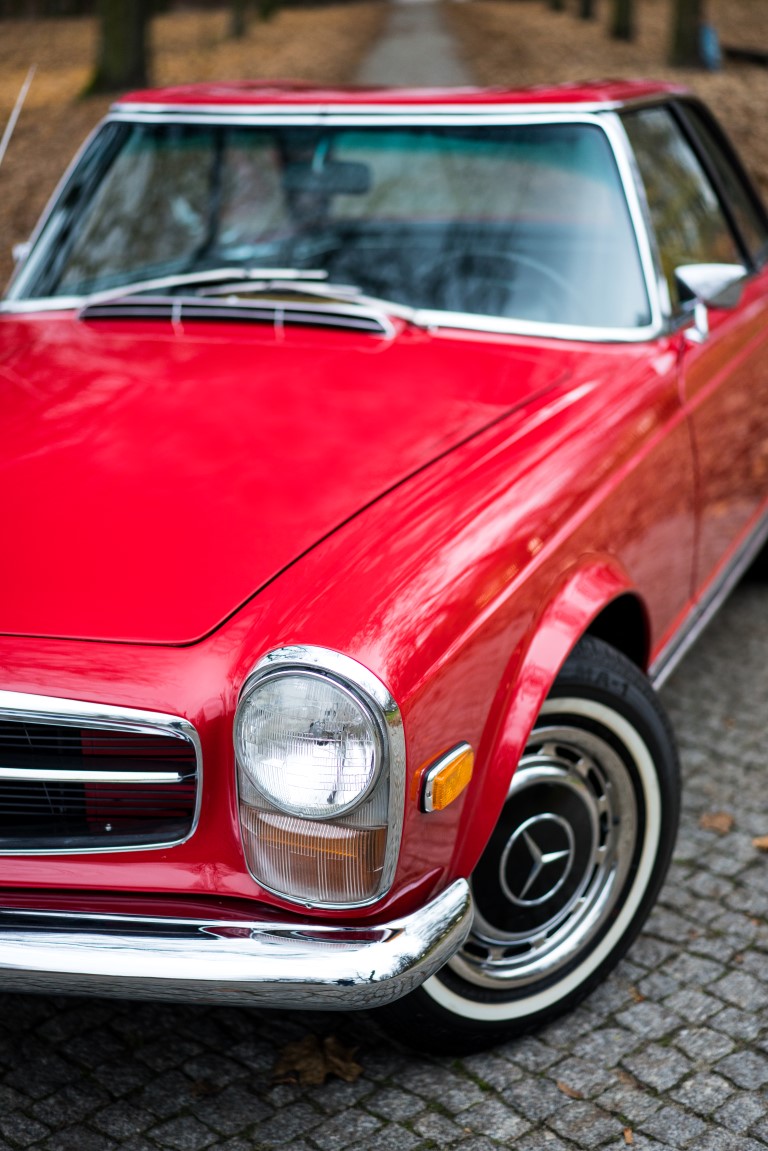 – The rarest variant of the model with the 250SL designation

The Mercedes-Benz W113 is commonly referred to as a “Pagoda”, and it owes this nickname to the rather characteristic concave construction of its hardtop, resembling the silhouettes of the famous Oriental temples. The car was designed by the legendary French stylist Paul Bracq. The model debuted in 1963 as the successor to the line of elegant roadsters initiated by Mercedes 190SL. Mechanically, the Pagoda was related to the larger model – the W111. It was distinguished by a number of improvements, such as the independent front suspension or dual circuit braking system with discs on all wheels (since 1967) as well as improved six-cylinder engines. The car’s design also encompassed all safety aspects, taking advantage of crumple zones and making the passenger cabin stiffer, removing all sharp edges from the interior and preparing it for the installation of safety belts. To compensate for the weight gain, part of the bodywork was made of aluminium, since the Pagoda had a sport pedigree and nimbleness was an important feature of its character. The car became legendary during its production run and it was often chosen by famous and popular celebrities – artists, actors and aristocrats. Fewer than 50,000 of W113s were built, and the remaining cars enjoy unwavering popularity among lovers of classical automotive industry, while their value on the collectors’ market is constantly rising.

The Mercedes 250 SL presented by Ardor Auctions was brought to Poland in 2015. Restoration of the vehicle began in September 2016 at an authorised Mercedes-Benz workshop. The process, which took almost two years, was thoroughly documented. The vehicle’s bodywork has undergone thorough restoration and was repainted according to factory specification. The included chrome-plated accessories look very impressive. All gaskets and other wear parts were also replaced during the works. Mechanically, the car underwent a full check-up and all necessary repairs were carried out. The passenger cabin was in good condition and required only professional refreshment and re-adding some elements. This is important from a collector’s point of view, as the original interior adds authenticity to the historic Pagoda. The soft roof is also in pristine condition. The car has been registered as a historic vehicle on the basis of an expert opinion and is offered for sale for the first time. The Mercedes W113 is a great investment that will pay for itself – not only in financial terms. The beauty of this model defies the passage of time, and the amazing pleasure of driving won over the hearts of car connoisseurs.
[/av_textblock]