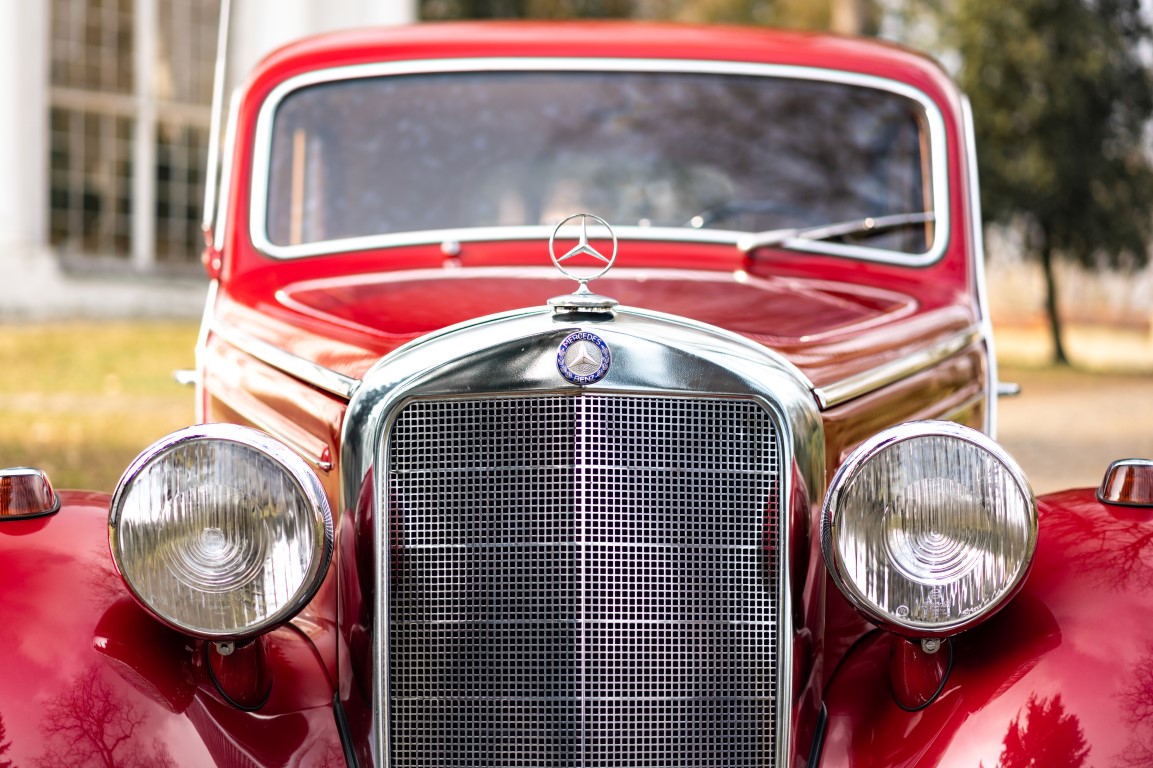 – A rare executive car with a pre-war pedigree

– The vehicle has undergone full restoration

The Mercedes W136 series was already being produced before the war, as the first cars left the factory in 1936. The key to the success of this design was a very simplistic and reliable construction, which led to the W136 – also known as the 170V – to become the company’s most popular car in the interwar period. By 1942, Mercedes had already made more than 70,000 of these vehicles. The range of bodywork variants included the two- and four-door executive car, two variants of a convertible executive car and two separate convertible variants – A and B – as well as special utility vehicles such as ambulances, vans or cars fulfilling other functions. The “V” in its name was supposed to distinguish it from the 170 H model – its younger brother with the same engine, but located at the back. The four-cylinder unit replaced the six-cylinder engine, which offered the same displacement. The engine, which had a power output of around 40 horsepower, consumed about 11 litres of fuel and could get the car to a speed of 108 km/h. The production of the car stopped for a while only to be restarted in 1946, which helped the German automotive industry to recover from the wartime ruin and devastation; however, the choice of variants was limited, with only a four-door executive car available to the general public. Since 1949, diesel engines were installed in the car, which was a novelty at that time. The Mercedes 170 S-D was the first post-war and third ever diesel passenger car. After many modifications and changes, the car was finally discontinued in 1955, but not after doubling the pre-war sales results. Nearly a quarter of the total production volume was released with diesel engines.

The vehicle which will be featured at the March auction was brought to Poland in 2002. Originally equipped with a diesel engine, it is now powered by a gasoline one. The car has been fully restored, and a great deal of attention was paid to mechanical issues. The engine, gearbox and differential were dismantled and regenerated, while the suspension and exhaust system were properly refurbished. The body now has a metallic paintwork, which was not available in the 1950s, but which goes great with the historic lines of the car. The interior was reconstructed to resemble the original one. Since the restoration, the car has only been used very rarely and stored in a dry and heated garage, which means that it does not require any work as of now. The car’s interior lacks a few less significant elements, as well as a single wiper; however, the blinkers which were characteristic of the vehicles of the time are in good working order. Despite being popular in the post-war period, the Mercedes 170 S-D is a rarity at old-timer rallies. Driving the 170 is a real journey back in time, and we can assure you that nobody will be able to walk by without taking a second look.
[/av_textblock]