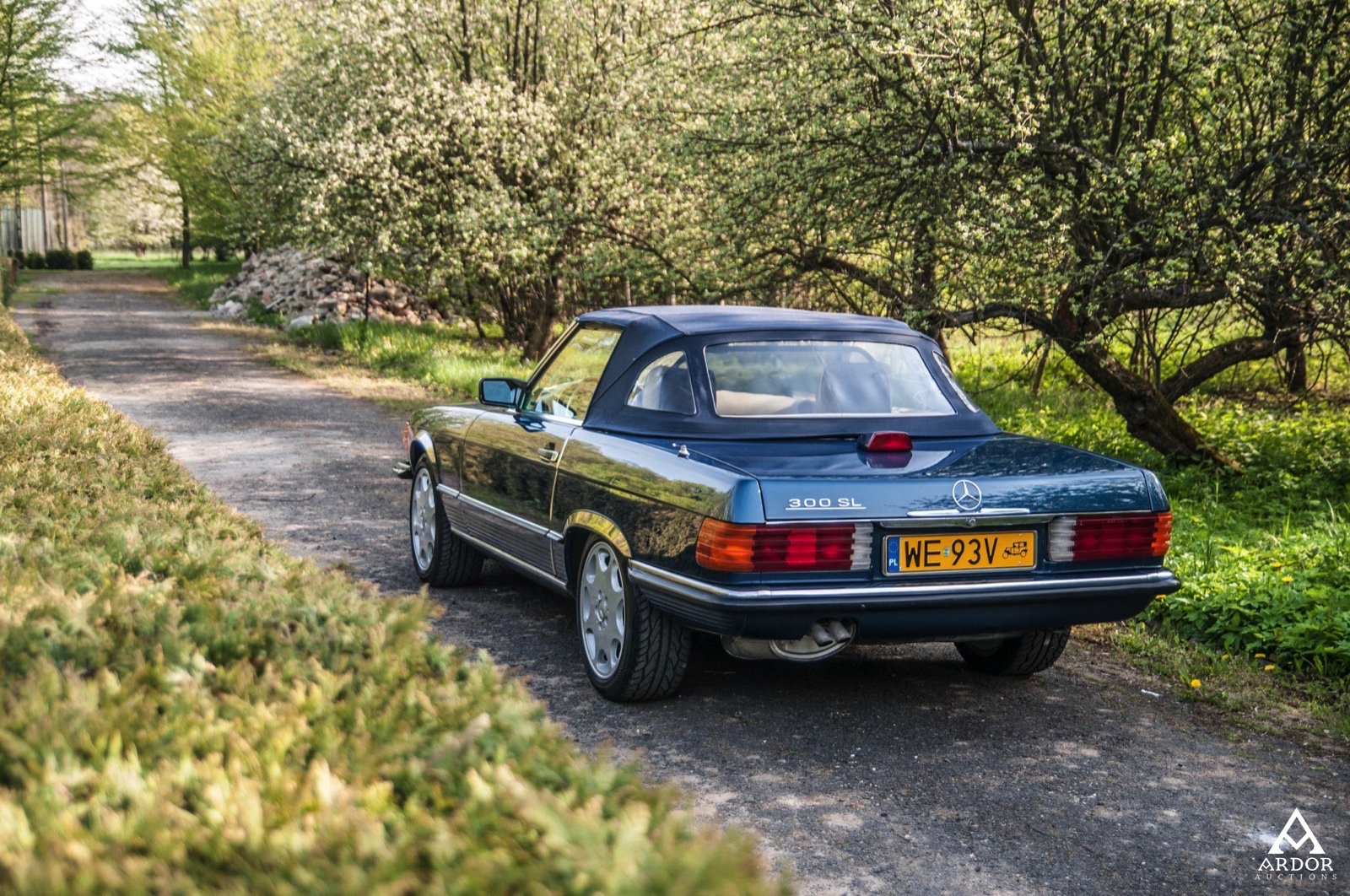 When the R107-gen Mercedes SL was launched, expectations of typical buyers towards cars of this type were increasingly high. Not only did new roadsters have to be more dynamic, they also had to be more comfortable and safer. The R107 was a successor to the legendary “Pagoda”. Its styling was the beginning of a new, modern look for Mercedes, which would be seen in all subsequent company designs, with vertical rather than horizontal front grille. First examples of the R107 rolled off the production line in Sindelfingen in 1971. The car was incredibly well engineered and refined. Engineers put a lot of stress on the aforementioned aspect of safety. As a result of that, they used several safety features such as crumple zones or engine that slid under the passenger cell during a head-on crash. It also had extremely strong A-pillars and windscreen frame with bonded glass for better roll-over protection. Later on, customers could also specify their cars with antilock brakes or driver airbag.

The new roadster had to be safe and comfortable, but also fun to drive. The last aspect was dealt with by giving the R107 powerful engines. Initially, the customers could choose between a variety of V8 engines, least powerful of which displaced 3.5 litres and developed 200 BHP. In 1973 it was joined by a 4.5 litre engine, which was 25 BHP more powerful. Later they were replaced by 3.8 and 4.2 litre units. The most powerful engine in R107 engine displaced 5 litres and developed 240 BHP. It was available from 1980. From 1974, due to the ongoing oil crisis, engine line-up in Europe was joined by a straight-six, 185 BHP engine. In 1985 a new entry-level, straight-six engine was introduced. It displaced 3 litres and developed 188 BHP.

R107’s biggest market was the United States. In 1972 a hardtop SLC variety was introduced specifically with North American customers in mind. Apart from a fixed roof, it was distinguished from its soft-top counterpart by a longer wheelbase (by 36 centimetres). US-spec cars had different bumpers to those sold in Europe (to comply with US safety regulations) and exposed, quad headlights, in place of the one-piece headlamp assemblies applied in other markets.

Several changes had to be made under the bonnet to make the car compliant with stringent US emissions requirements. Only V8 engines were offered in the US, least powerful of which developed just 155 BHP (380 SL/SLC). US was the only market where a 560 SL/SLC variety was offered (displacing 5.6 litres), but at 227 BHP, despite large displacement, it was no more powerful than the most powerful versions offered in Europe.

The suspension of the R107 was a revolution compared to the Pagoda. At the rear, instead of a single joint swing axle, a diagonal pivot swing axle with semi-trailing arms and a rear sub-frame was used.

This car was successful in motorsport, mostly in endurance rallying. One of the professional drivers to have competed behind the wheel of an R107 SL was a Polish rally driver Sobiesław Zasada.

The Mercedes 300SL offered at the Rozalin 2016 auction is of a very rare and uncommon type of the R107 series. This car was ordered brand new in the UK, however it was dealer-configured as a special export continental car with left hand drive steering. It is equipped with a mile-scaled speedometer and a third stop light. On top of it it was ordered with exterior temperature indicator and heated seats. It left the factory in a artctic white exterior over dark blue interior color combination and remained most of the time in the hands of its first owner in Mallorca. After it was brought to Poland it benefited from a ground-up body, engine and interior restoration. Its original paint was removed and it was resprayed in dark blue from Mercedes palette, and its interior was fully re-upholstered in beige-cream leather. The dashboard was also covered in leather for a better visual effect. The soft top was replaced by a new unit in its original dark blue shade. Interior wooden elements and plastics were restored. It comes with two sets of wheels, including ones from the mid 1990s, and a renovated hard top. The top of the boot needs some attention as it likely needs to be repolished. Serviced regularly and rebuilt from the ground-up, this 300SL will be a perfect weekend escapade companion, but will also effortlessly take its new owner on longer trips