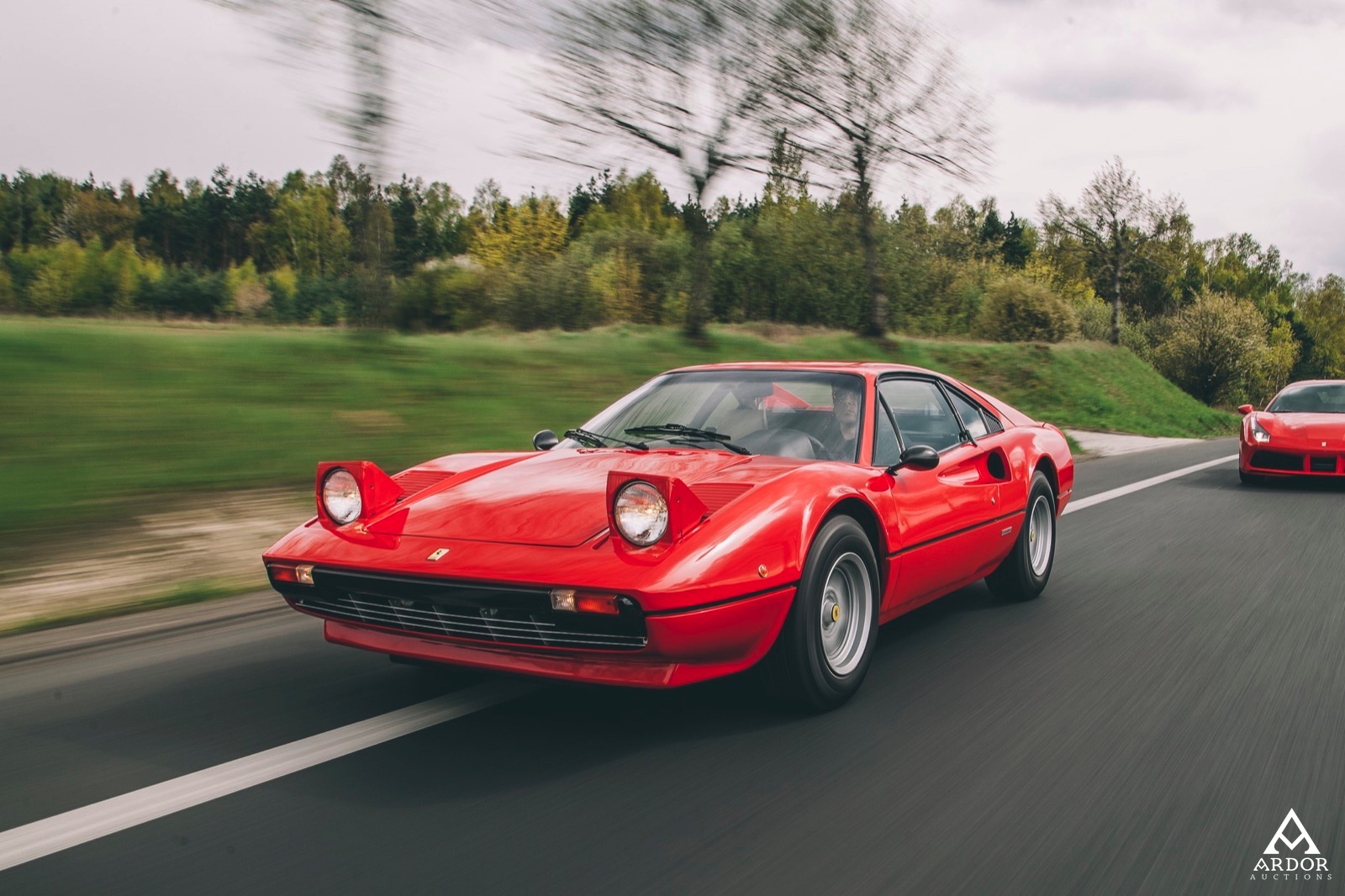 The Ferrari 308 GTB represents a line of classic, two-seat, mid-engine Ferraris. It was a development of the Dino-based Ferrari GT4 project. It was unveiled at the 1975 Paris Motor Show. The main difference between it and the GT4 was the body, styled by Pininfarina’s Leonardo Fioravanti, who had been responsible for some of Ferrari’s most celebrated shapes such as the Daytona. The body of the 308 GTB was manufactured by Carrozzeria Scaglietti (Bertone had also submitted his design proposal, but their project had been rejected by Ferrari). 308 GTB was a two-seater, as opposed to the 2+2 GT4. It meant the new car had become a successor to the Dino 246, which was also a two-seater. Between 1975 and 1977 the body of the car was made from fiberglass, which helped keep the weight down at just 1050 kilograms. Later on, the Italians switched back to steel body, which resulted in an overall weight increase of approximately 150 kg. The car was powered by a transversely mounted V8 engine producing 252 BHP (255 PS) in European versions (cars for US market were down to 237 bhp or 240 PS due to emissions control devices). European specification cars used dry sump lubrication. Cars destined to the Australian, Asian, Middle East and US market were fitted with a conventional wet sump. The engine was equipped with four Weber carburettors and channelled power to rear wheels via five-speed manual gearbox. In 1977, the 308 GTB (Gran Tourismo Berlinetta, or coupe in Ferrari speak) was joined by a GTS version (Gran Tourismo Spider also known as targa).

In 1980 Bosch K-Jetronic mechanical fuel injection was added to make the 308 compliant with new emissions standards. Emissions decreased at the price of a power drop to 211 bhp (214 PS) on European models. Fuel-injected models were called 308 GTBi and GTSi. Two years later, power was once again increased to 237 bhp/240 PS, thanks to fitting the engine with four valves per cylinder – hence its name, Quattrovalvole, literally „four valves“ in Italian. Ferrari introduced a two-litre version for the domestic Italian and New Zealand market. Initially its engine was normally aspirated, making it one of the slowest Ferraris in history, but later it was fitted with a turbocharger. These cars were sold under the   208 GTB/GTS or 208 GTB/GTS Turbo monikers. The reason Ferrari introduced cars with such small engines were Italian tax regulations. According to them, cars with engines displacing more than 2-litres were subjected to a much higher value added tax, which in  turn increased the retail price. Production ended in 1985, when it was replaced by the 328. It had a similar layout, but had a 3.2-litre engine. A total of 3219 GTS and 2897 GTB examples were made in the first production period, 808 of which were cars with fiberglass body.

The GTB/GTS has become an iconic sports car of the 1970s. It was made famous on the popular television series “Magnum, P.I.”.

The Ferrari 308 GTB featured at the Rozalin 2016 auction rolled off the production line in 1979 and was destined for the American market. In 1980 it was delivered to its first owner, who was a Ferrari dealer. Second owner of this car purchased it in 1981 in Michigan. The car comes with an original proof of purchase and a number of various documents. It remained in the hands of its second owner for 20 years. Later on it was sold to a customer in California. Last service bills from the US date back to 2009. Several other documents have been preserved, including service books or hand-written documentation of all the maintenance tasks performed on the car. In 2010 the car was purchased by a new owner from France, who commissioned a restoration company to convert the car to European specification. This included removal of “side markers” for example. The bodywork is in an overall good shape – the car is pretty much faultless. Mechanically, the car is spot on and ready for long, trouble-free driving. Ferrari 308 is without a doubt an icon of the early 1980’s. This particular example is worthy of having its place in the garage of every seasoned car collector. Its current owner registered it as a classic car, which has been fully documented and proven by an independent expert.