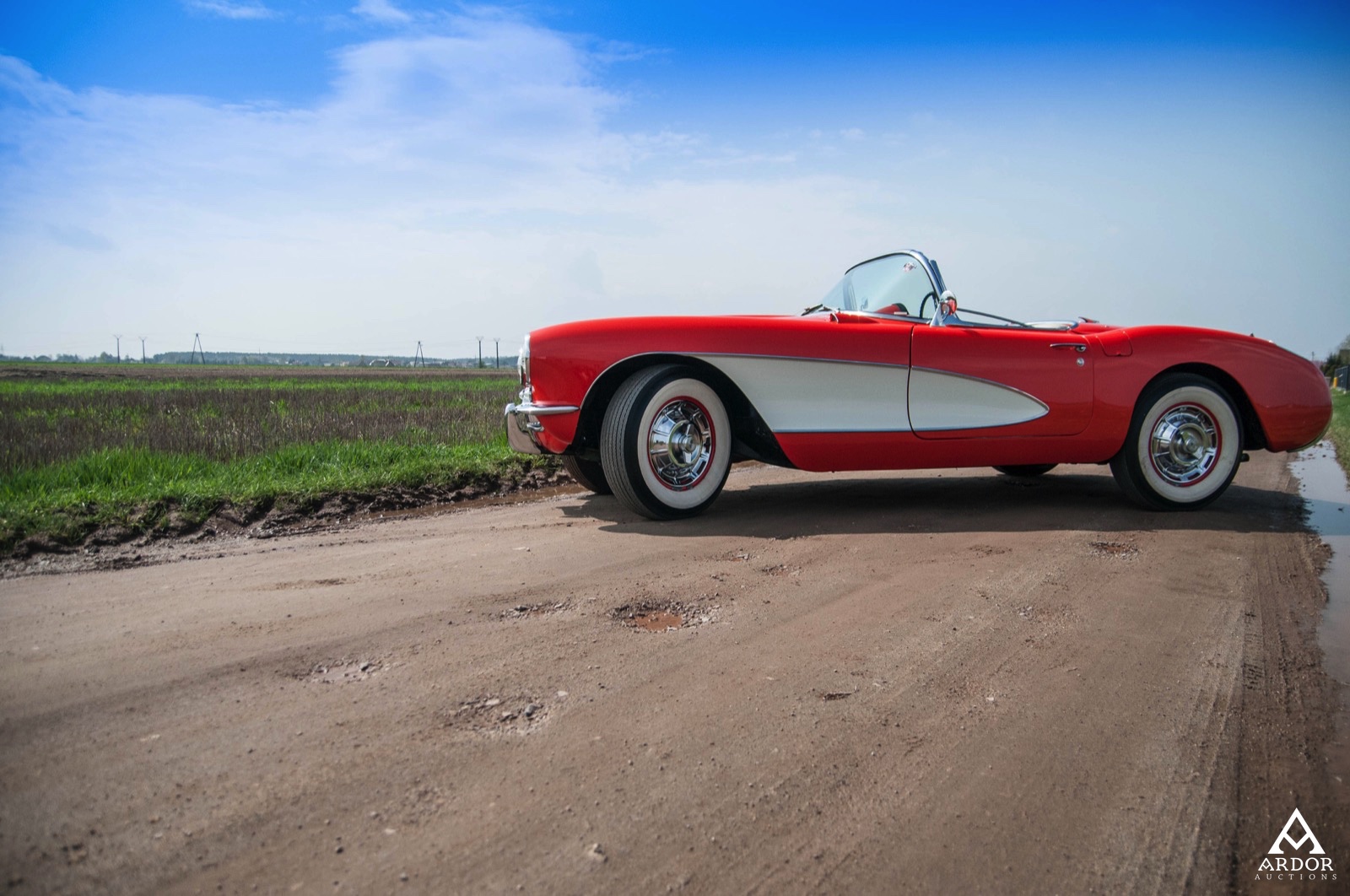 Chevrolet Corvette is widely regarded as the first American sports car. It is a complete legend and a dream car for whole generations brought up in the United States and in other parts of the world.

The first generation Corvette, which is the car offered for sale here, was unveiled in 1953 during the New York International Auto Show, while the first actual car rolled of the production line six months later. Under the bonnet of this boldly styled 2-seater, 2-door convertible there was either a straight six-cylinder engine or a V8, the latter being one of the features Corvette became famous for. The most powerful engine developed 360 BHP from 5,4 liters of displacement. Initially, Chevrolet’s sports car was available exclusively in white body paint and with red interior. More optional customization features were introduced in the second year of production.

Throughout its 9-year lifecycle, the Corvette had undergone several overhauls, most substantial being the one carried out in 1956. List of optional extras had been updated (e.g. one could order the car with power windows). On top of that, straight-six engines had been discontinued. Changes were immediately noticeable, as the styling had been thoroughly refreshed. Overall, a total of 69 000 C1 Corvettes had been produced, before it was replaced by a new generation simply called the C2 in 1962.

The car on offer is a 1957 model year, has been fully restored and painted in Venetian Red colour. It has had several interesting modifications done to the powertrain. Is chassis number is E57S100050.

Chevrolet Corvette C1, which will be offered on the Rozalin 2016 Auction, is a truly unique vehicle. It is one of 60 cars from the first batch of C1 Corvettes after a thorough overhaul and restyling. What makes it even more interesting, is that it has no bumper-exiting exhaust tips (typical for C1 Corvettes). Instead, they are placed underneath the rear bumper. This particular example, chassis number E57S100050, model year 1957, rolled off the production line on September 24th in 1956. It was originally equipped with a three-speed automatic transmission and was one of just 3167 examples of the C1 Corvette powered by a 265 cubic-inch engine. The body has been covered in Venetian Red paint, which was a popular colour choice for this model.

A couple of years after purchase, the owner of this car had swapped the engine for a bigger one, displacing 283 cubic inches, mated to a new four-speed gearbox from the newer model. This was a popular upgrade among Corvette C1 owners. Bigger engine ran more smoothly, while four-speed gearbox improved comfort and driveability.

This example, offered by the vintage and classic car auction house Ardor Auctions, has been thoroughly restored. It needed several body repairs and respraying, which was taken care of two years ago. Original chrome body parts have been cleaned, many of them have been re-plated, too. When it comes to mechanics, the car has had its engine oil changed and undergone a full inspection. Front axle of the car has been refurbished, while all the worn parts have been replaced or restored. A substantial restoration has also been performed on the inside. Interior of the car showed several signs of wear and tear, so the old seats and upholstery have been replaced with brand new ones. Chrome and plastic parts have been restored. The original vinyl soft-top has been preserved in a very good shape. The car is ready to cover even long distances in the summer season. According to the owner’s statement, few parts need to be looked at in order for the car to be a perfect daily driver: the stereo is missing a speaker and an oscillator and the heater needs to be refurbished.

This particular Corvette is an extremely rare and desirable collector item and there is no doubt that its future owner will surely be delighted with ownership and driving experience. Its iconic silhouette is among the most recognizable shapes in the history of American sports cars.
[/av_textblock]