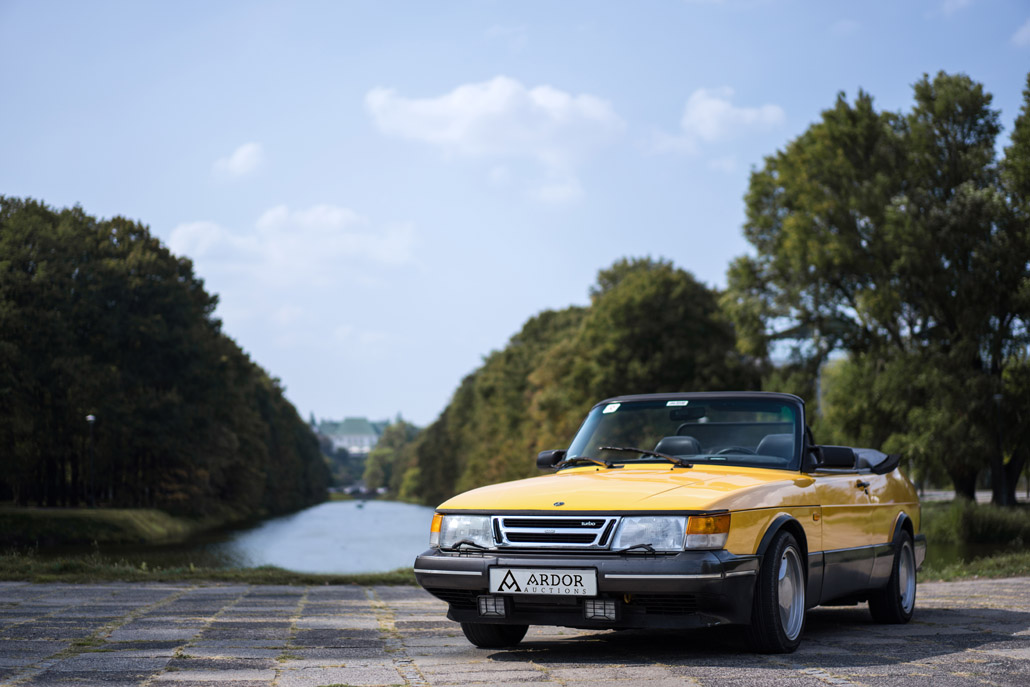 The Saab 900 was made over a period of three decades, from 1978 to 1998. Two generations were produced, the first of which was based on the 99 model and was available was a two- and four-door saloon and as a three- and five-door hatchback. Its overhauled, modernized version was called the 900, had much more rounded shape and was unofficially called ‘NG’. It went on sale in 1993 only as a hatchback. It was co-developed with General Motors, who became the owner of the Saab brand. The original model was nicknamed ‘The Crocodile’ thanks to its distinctive, angular body shape. Apart from that, it was also one of the first production cars ever to feature a turbocharged engine. Even though BMW and Porsche did it before, Saab beat them in terms of production volume and availability on the market. A prototype cabriolet version was unveiled at the 1983 Frankfurt Motor Show, followed by a production version that went on sale two years later. It was powered by a 2-litre engine developing 175 break horsepower. First 400 examples rolled off the production line in 1986 and were only sold in America. Over there, they sold like hot cakes since niche European cars were appreciated by the American customers. Cars from that production batch are sought after because of the fact that they were made before facelift in 11987 and have older front fascia, often referred to as the ‘flatnose’. Subsequent editions were still hugely popular. The convertible 900 became a fashionable choice for people with extraordinary taste. It was even sold with a catchy slogan: ‘Reliable as a Mercedes, safe as a Volvo and much cooler than a BMW’.

Just a couple of hundred of examples of the Saab 900 Turbo Convertible featuring a special Monte Carlo Yellow paint were made. Most of them ended up in the United States. Apart from the paint, late 1991 and early 1992 models were distinguished by their aerodynamic package dubbed ‘Special Performance Group’, the most powerful engine with the highest boost pressure, three spoke wheels and leather upholstery. The Saab to be featured at the September event was brought to Poland three years ago from the United States. Since then the owner has had a number of mechanical repairs done. List of replaced or refurbished parts is very lengthy. Main focus was placed on making the engine tight. All of the work was done by a workshop specialized in the Swedish brand. Part of the bodywork was repainted because of scratches and dents on the edge of the fender. Old folding roof was replaced by a new part made by a renowned manufacturer. The car is fitted with a stylish Nardi Torino steering wheel, non-stock 16-inch Aero wheels, additional gauges, Clarion stereo made specifically for Saab and special cover for the cabin to be used when the roof is down. This example is a member of one of the rarest series of the universally loved 900. Bringing it to an even better condition will not require a massive effort. Whoever decides to choose it will take joy in owning a very rare and unusual classic, which is totally different to its competitors of the same age.